A video of a police inspector protecting a Muslim boy from an angry mob in Ramnagar, Uttarakhand, has gone viral. The incident reportedly took place on May 22, when the boy was discovered meeting with a Hindu girl inside a temple in Garjiya village.

In the video, the cop, identified as Sub-Inspector Gagandeep Singh, can be seen shielding the boy, as the mob attempts to thrash him. According to The Lallantop, the boy’s affair with a Hindu girl did not go down well with the crowd, who tried to lynch him. The crowd can also be heard asking for the boy’s identification in the video.

While Gagandeep tried to protect the boy from being lynched, the crowd chanted anti-police slogans and demanded for him to be handed over to them. The mob also shut the temple gates in its attempt to not let him escape.

ALSO READ: Mob Thrashes Couple In Assam For Hanging Out Together 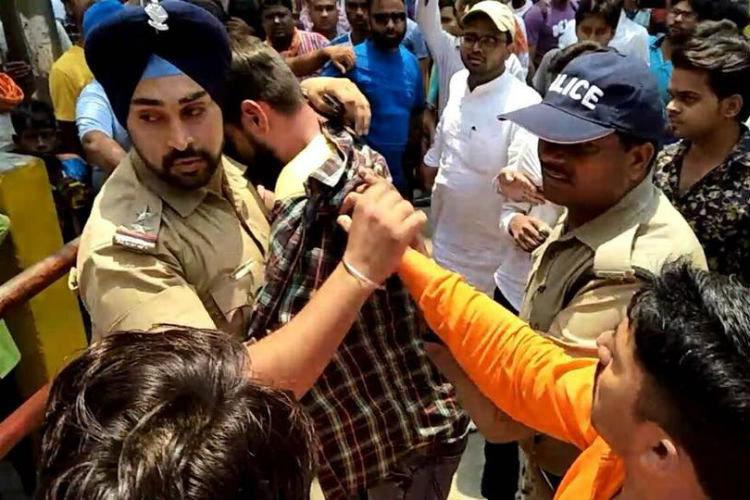 When the girl protested against the violence, the crowd told her, “We will chop him. Being a Hindu, you are traipsing around with a Muslim. You will be thrashed, too. You are a disgrace to Hindus,” The Lallantop reported.

Ramnagar’s Inspector In-charge Vikram Rathod told The Lallantop that members of Bajrang Dal and Vishwa Hindu Parishad (VHP) comprised the mob. “On receiving information about the matter, we rushed a team to the spot. By the time our team reached, the crowd had started manhandling the youth and his friend,” he said.

“Here, an affair between a Hindu and Muslim can give rise to conflict. The police has to take care of everything,” Rathod added, “If a Hindu boy were to be spotted with a Muslim girl at a mosque, wouldn’t that lead to chaos?”

Speaking to InUth, Gagandeep confirmed the occurrences, saying, “I was posted at the Garjiya Mandir near Ramnagar on the day of the incident. It’s a pleasant location, so couples often go there. So, a few locals started questioning the couples. When people found out that the boy was a Muslim and the girl was a Hindu, they got enraged.”

He added, “This wouldn’t have been a problem, had it not been about an interfaith couple.” However, it has not been confirmed that the attackers were Bajrang Dal or HYV members, he said. No complaint has been filed by the couple yet.

Gagandeep is now being lauded as a “true Sikh” on social media.