This Uttarakhand woman is literally scaling heights at 23.

Sheetal Raj from Uttarakhand’s Pithoragarh district climbed Mount Everest, the highest mountain peak in the world, becoming one of the youngest from her state to accomplish the feat. This is not the first time that Sheetal has scripted history. Earlier she had scaled the third highest peak in the world – Mount Kanchenjunga, becoming the youngest Indian woman to do so.
Raj’s interest in mountaineering started at a young age “I used to accompany my mother when she used to go into the jungles of mountains looking for wood. The view from there and the silence made me feel very peaceful,” she told Hindustan Times
She went on her first expedition in 2014  as part of her college’s National Cadets Corps (NCC) unit.
“She has always been a hard-working girl determined to achieve what she desired. While training she used to push herself beyond her capabilities and strived to achieve her best,” Sheetal’s trainer Yogesh Garbyal told TOI. 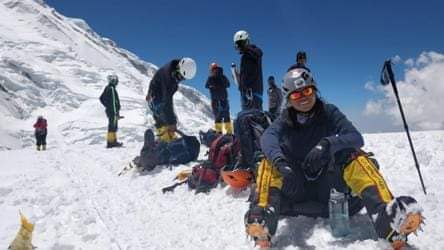 Proud of his daughter’s achievement, Sheetal’s father Umashankar Raj, who works as a taxi driver, told ANI, “Being a taxi driver I never imagined that my child will be able to accomplish so much, other girls will get inspired by her achievement.”