Tibetan spiritual leader and Nobel laureate the Dalai Lama who arrived in Guwahati on April 1 is currently on a 12-day visit to Assam and Arunachal Pradesh. This trip comes even as China has staged a protest against Dalai Lama’s trip to North East. Additionally, United Liberation Front of Assam (ULFA) has also asked the Dalai Lama to make any anti-China statements during his visit.

While Dalai Lama received a warm welcome in Guwahati, “the Chinese government is resolutely opposed to any country’s support”. China who labels Dalai Lama as an “anti- China separatist” had urged India to not invite Dalai Lama over and had also asked the spritual leader to not visit Arunachal Pradesh.

Here’s a round up of his trip so far:

April 1- Dalai Lama arrives in Guwahati. While speaking to the reporters at the airport, Dalai Lama affirmed that he was visiting the state despite facing protests from China to promote religious harmony. 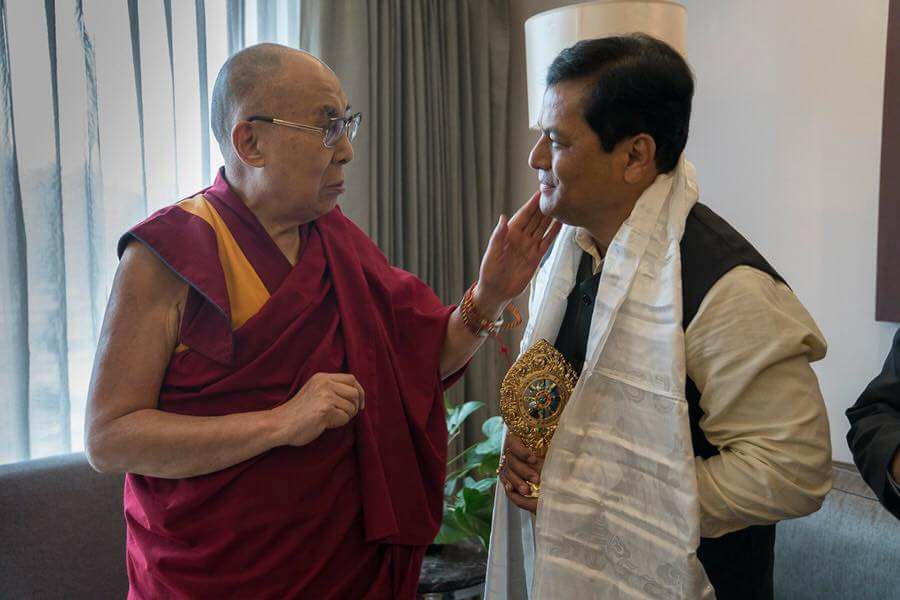 He also released the Assamese version of his first autobiography My Land and My People. 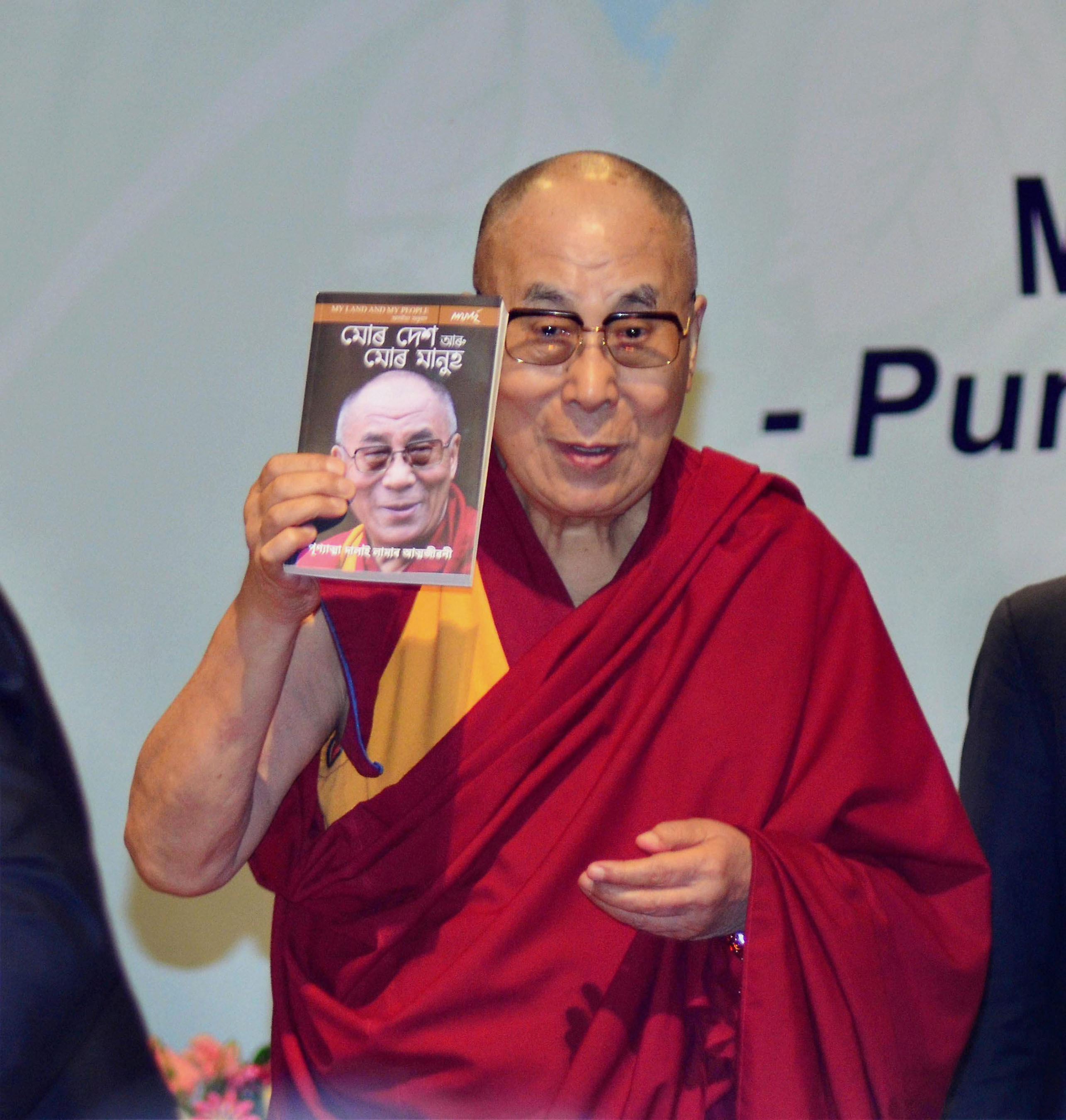 April 2: Dalai Lama meets Naren Chandra Das, one of the seven Assam Rifles soldier who escorted Dalai Lama when he entered in India for the first time in 1959, at Indo China border in Arunachal pradesh. 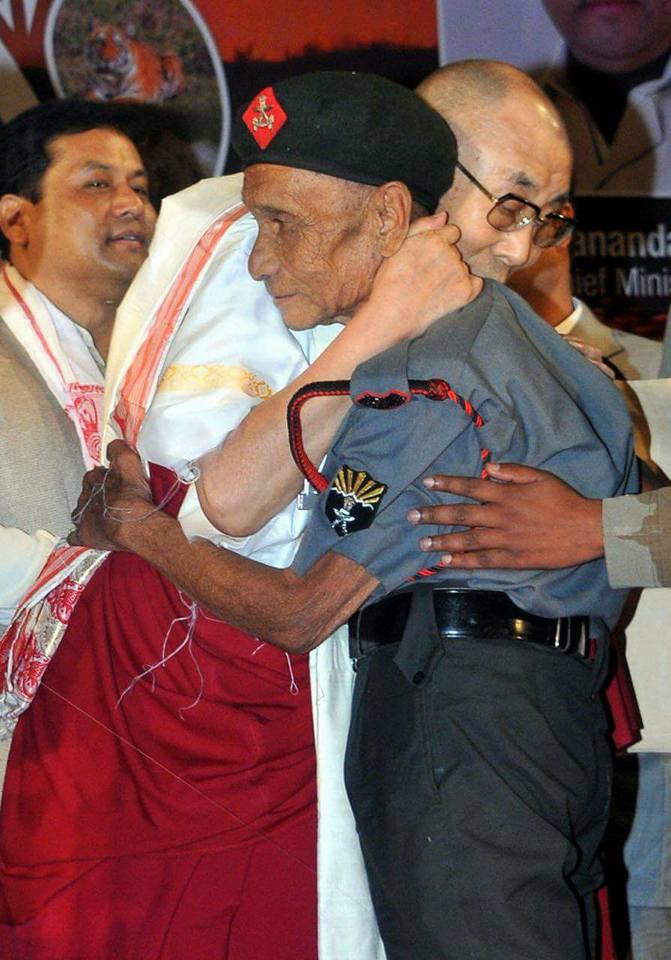 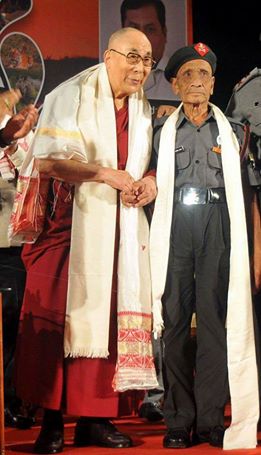 On April 2, Dalai Lama also gave a lecture in Guwahati University on ‘Ancient Indian Knowledge in Modern Times’, and made the students burst into laughter. On being questioned about the secret to his beautiful skin, Dalai Lama joked saying that he will not reveal the secret of staying young. 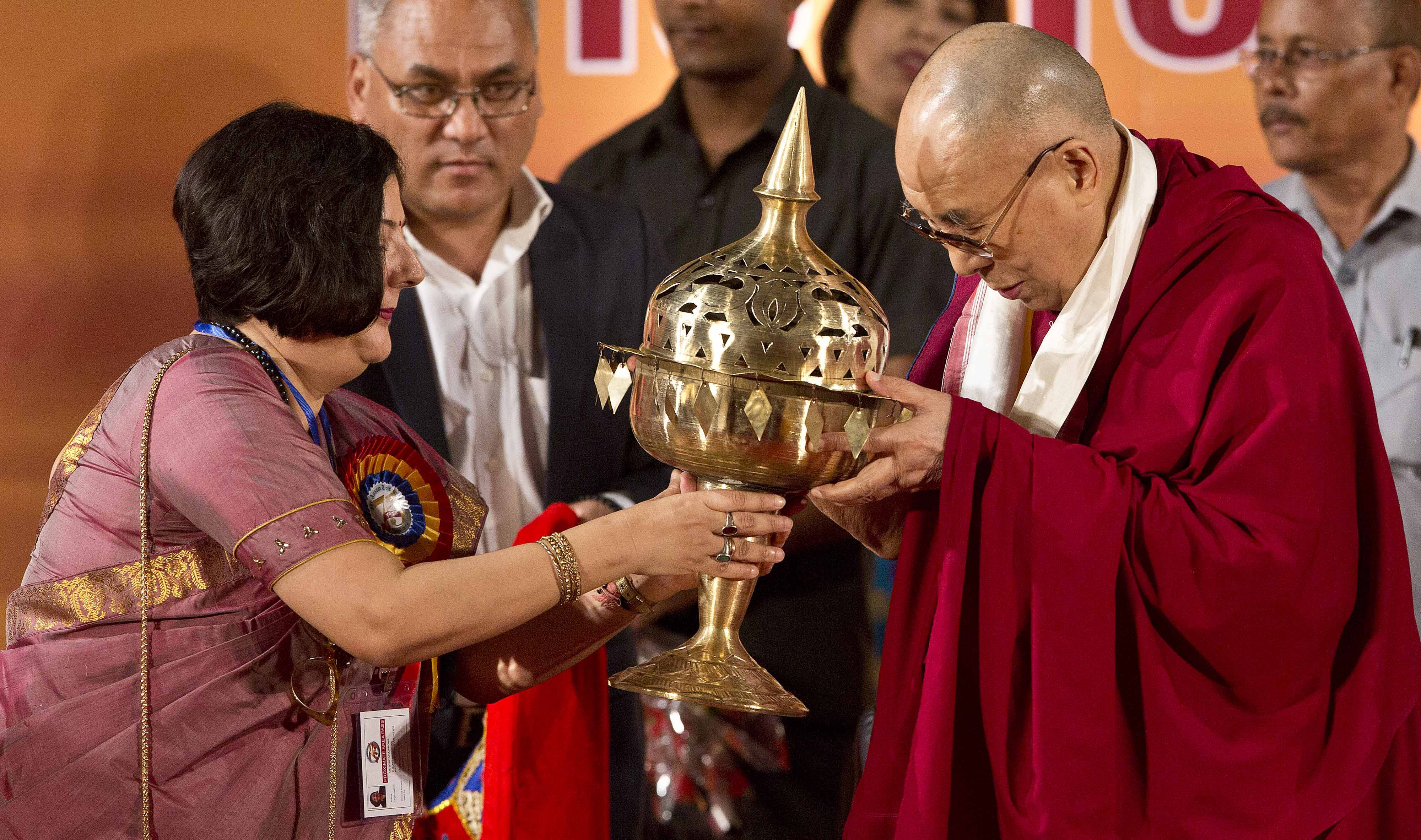 Babita Rajkhowa, Director of Assam Tribune newspaper, presents a Sarai, a traditional Assamese brass handicraft, to Tibetan spiritual leader Dalai Lama during the platinum jubilee celebrations of Assam Tribune newspaper in Gauhati, India, Saturday, April 1, 2017. The Dalai Lama has recalled his 1959 flight to India from Tibet ahead of a visit to northeast India’s Arunachal Pradesh state despite objections by China, which considers it a disputed region. Last month, China warned of “severe damage” to relations with India and increased regional instability if the Dalai Lama proceeds with his April 4-11 trip to the state. (AP Photo/Anupam Nath)

He also addressed the public as Assam Chief Minister Sarbananda Sonowal, left, and Governor of Assam Banowari Lal Purohit, right stand on the venue of Namami Brahmaputra festival on the bank of river Brahmaputra in Guwahati. 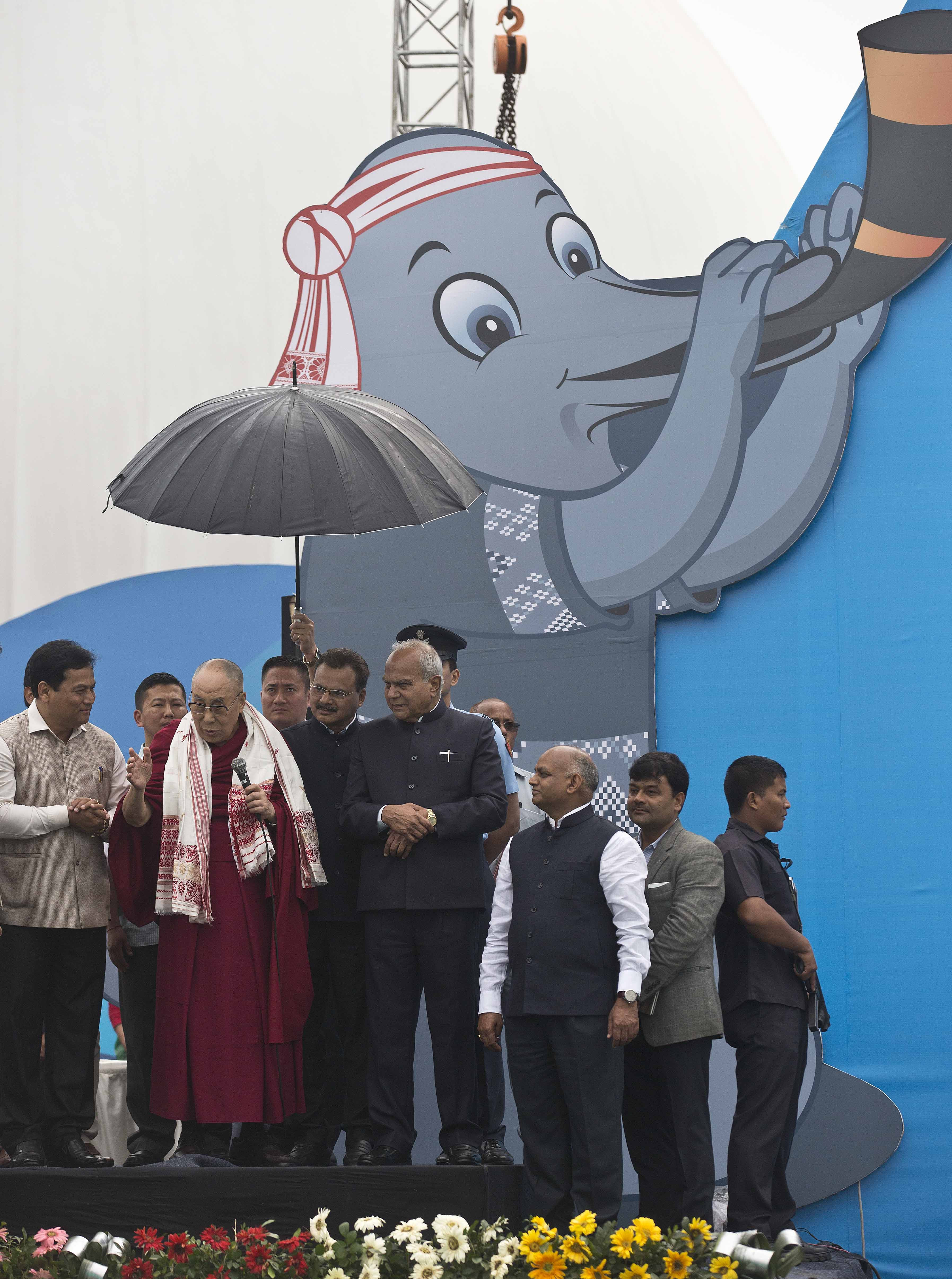 He further said that women should actively participate in social acitivities. Women should take more active role for human compassion. My first teacher was my mother, not anyone else. Females are biologically more stronger,” he said. 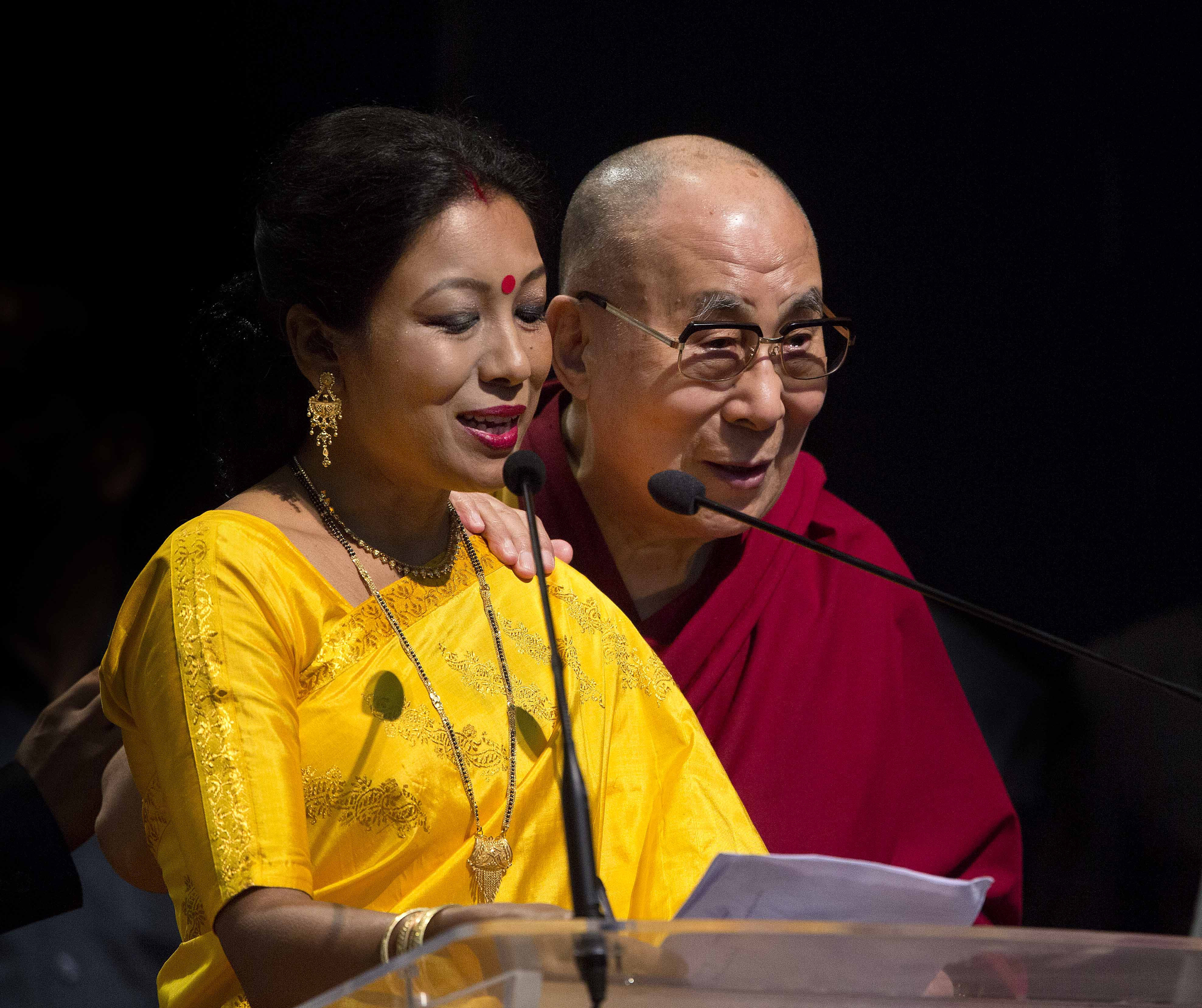 Tibetan spiritual leader the Dalai Lama, right, listens to an Indian woman who was welcoming him prior to his lecture on “Ancient Indian Knowledge in Modern Times” at the Gauhati university campus in Gauhati, north eastern Assam state, India, Sunday, April 2, 2017. (AP Photo/Anupam Nath)