Former Indian Premier League (IPL) chairman Lalit Modi has been relieved by the International Criminal Police Organization or Interpol after they have rejected to issue a red notice to him as requested by India. Now after this, the Interpol will not arrest Modi in context to India’s extradition request.

Lalit Modi has served as the Vice President of the Board of Control for Cricket in India (BCCI), President of the Rajasthan Cricket Association (RCA) and chairman and founder member of the IPL.

Modi has been living in London after serious charges like misconduct, indiscipline and financial irregularities were put on him in India. On March 24, the Interpol released letter in which it was written,“As of today, Mr Lalit Kumar Modi, born 29 November 2963, is not subject to an Interpol Red notice or diffusion and not known in Interpol’s database.” 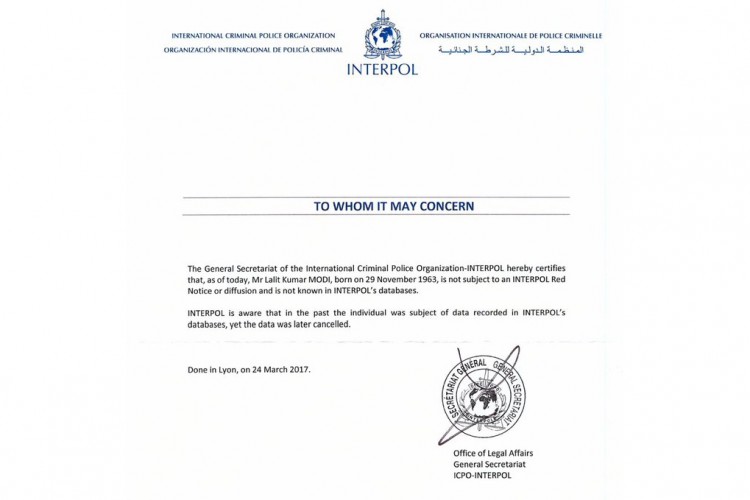 Later, Lalit Modi took to his Instagram account and posted a message along with the picture of the letter and expressed his concerns. He wrote,”I just got off from a flight from #barcelona thru which I sat completely #numb. Just as I was boarding the flight I got the #news that interpol had finally #investigated and concluded and reached a #verdict in my favour with a detailed letter of #rejection Of #india‘s request for issuing of a #rednotice. The #sword that was #hanging over my #head had suddenly gone. At first I did know what to do or say. I Just forwarded the notice to a few people who were either involved, supported or were well wishers without a word from me. The flight was on the runway. I shut the phone. And the whole flight I sat completely numb overcoming with so many emotions and a sense of #anger at first and then a greater #sense of #gratitude. I had finally achieved the #mantra – “that this shall pass too”. I had always in my #heart known #truth will Prevail. But never in my wildest #dream think it would be so soon. I am just so thankful to my immediate #friends and well wishers for being there and want to say thank you for standing by me. I now can peacefully chart my next step in life. Thank you.