Chairman Emeritus of Tata Sons, Ratan Tata, has expressed concern over the alleged growing intolerance in the country, dubbing it “a curse we are seeing of late”. Ratan Tata on Saturday raked up the issue of intolerance prevailing in the country, terming it a ‘curse’ India was witnessing of late. “I think everybody knows where the intolerance is coming from, what it is. Like many thousands, millions of Indians, one wants to see a country without intolerance,” PTI quoted the business tycoon as saying.

Tata was in Gwalior to attend the 119th foundation day function of Scindia School. During the address, he expressed his concern over alleged intolerance in the country.

Adding further, Tata said there was an urgent need to live in an environment wherein people loved each other. Soon, Tata received accolades on social media, with people expressing support for him in the best way possible.

“TCS and all Tata company bakhts can resign now,” another Facebook user posted. Social media went berserk as users were at their best, taking on BJP supporters in the best way possible. 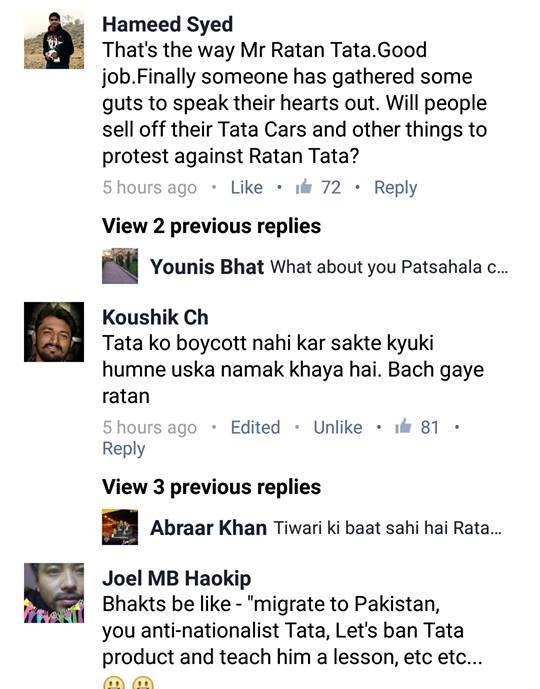 Only Anupam Kher can save bhakts from this difficult situation created by Ratan Tata. Intolerance march…!!

Spare a thought for Bhakts who will have to waste entire Sunday trolling, abusing Ratan Tata for using the word “Intolerance”

Tata is the latest to join the intolerance debate after some of his contemporaries raked up the intolerance issue in the past year. Infosys founder N R Narayana Murthy said there was a considerable fear among minorities in India. Later, Biocon chief Kiran Mazumdar Shah also urged Prime Minister Narendra Modi to correct India’s image so as to prevent any threat to investments from abroad.

Later, Prime Minister Narendra Modi during his first town-hall address hit out at the cow-vigilantes, calling them anti-social elements hiding behind the mask of Gau Rakshaks.