BJP’s National General Secretary Kailash Vijayvargiya has issued a diktat ahead of the release of Shahrukh Khan starrer Raees and Hrithik Roshan’s Kaabil. Funny that Vijayvargiya is neither a trade analyst nor a film reviewer. Yet he has something to say about which film to the audience. According to him, to prove our patriotism we must watch Roshan’s Kaabil and ditch SRK’s film Raees. For some strange reason he also connected the films to demonetisation. However, he slyly skipped naming the actors and used the titles of the film in a clever way to bring home his message. 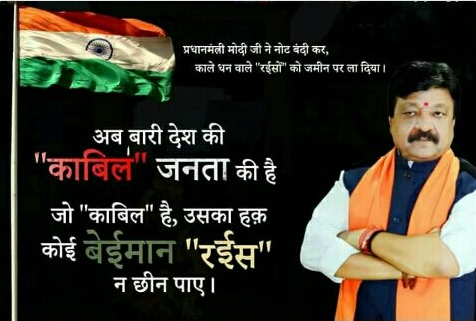 He tweeted out a poster stating: “The prime minister had grounded all ‘Raees with demonetisation. Now it is the turn of the ‘Kaabil’ citizen of this country. No ‘Raees’ should snatch the rights of a Kabil Indian.” It seems like some insane amount of jobless creativity went into wording that post but we are not complaining. Because knowing Vijayvargiya’s past record, such statements don’t come as a surprise. He has always targeted Shahrukh Khan.  Not new to such controversial and rabid communal remarks, Vijayvargiya has targeted Shahrukh Khan on several occasions before.  He has indirectly called SRK ‘anti-national’. He also tweeted late last year: “Shah Rukh Khan lives in India, but his heart is in Pakistan. His films make crores here but he finds India intolerant.” He deleted the tweet after drawing severe criticism. His remarks came after SRK commented on “increasing intolerance” in the country.