There is no relief for Uttar Pradesh Minister Gayatri Prajapati who has been on the run since February 27. The Supreme Court on Monday refused to stay the arrest of the rape-accused minister over the FIR that was lodged against him.

Politics over Prajapati has been heating up in this election season with Uttar Pradesh Governor Ram Naik also writing to Chief Minister Akhilesh Yadav, asking why a rape-accused minister is still a part of the UP cabinet. Fearing an arrest, the Samajwadi Party candidate from Amethi has been missing since February end.

The arrest of Prajapati has also been a poll topic with the BJP declaring that he will be sent to jail if the party comes to power in the state. “As soon as the BJP forms the government in UP on March 11, we would search (Gayatri Prasad) Prajapati even from the hell and send him to jail,” BJP chief Amit Shah had said.

Who is Gayatri Prajapati?

Prajapati won his first Assembly election in 2012 from the Gandhi family bastion Amethi, defeating Congress leader Amita Singh. He is believed to have been close to Samajwadi Party founder Mulayam Singh Yadav and brother Shivpal Yadav. Owing to this proximity, he was included as a minister in Akhilesh Yadav’s team as MoS for Irrigation. 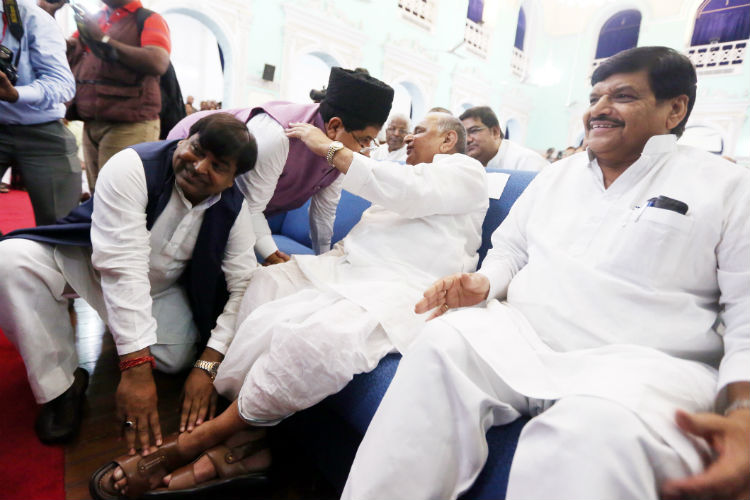 Just a few months later, Prajapati was given the charge of MoS (Independent Charge) and mining department in July 2013. In a span of six months, Prajapati got yet another promotion and was elevated to the post of a cabinet rank minister in January 2014.

A case was also presented against Prajapati before the Lokayukta for amassing illegal wealth. However, he was given a clean chit in the case by the Lokayukta.

Though the police have been claiming that the accused minister is absconding, Prajapati cast his vote in Amethi on February 27, nine days after the rape case was registered against him.

Fearing that he might fly out of the country, an alert has been issued to all airports asking the authorities not to give any chance to let Gayatri Prajapati escape. A non-bailable warrant has been issued against him and his passport has also been temporarily revoked.