An avalanche of data on offshore economic activities of some prominent Indian companies and individuals is out in the public domain. Indian Express today published the India chapter of how a Bermuda-based firm Appleby and Singapore’s Asiaciti with 19 tax havens across the world is helping MNCs exploit loopholes in tax laws and evade taxes. In a list of 180 countries, India figures at the 19th spot, with 714 Indians named in it.

So, what are Paradise papers?

German newspaper Süddeutsche Zeitung obtained a massive cache of 13.4 million corporate records through leaks from both the firms. It shared the details with the International Consortium of Investigative Journalists (ICIJ). As a partner of ICIJ, The Indian Express investigated all documents that had an India connection. The documents went through journalistic rigour for 10 months and are out now.

Who are the Indians named on it?

Some prominent Indians who find mention in it are–

Bollywood actor Sanjay Dutt’s wife Dilnashin Sanjay Dutt, popularly known as Manyata’s is also named in it. She held several positions in a Bahamas-registered firm Nasjay Company Limited. However, her spokespersons said that all her holdings were declared in her balance-sheet.

Corporate lobbyist Nira Radia was on the boards of two off-shore companies.

Why should you care about it?

Floating an off-shore is not essentially against laws. India has double-taxation avoidance agreements (DTAAs) with several countries with comparatively lower tax rates. This enables many companies registered in these offshore locations to avail the tax benefits of the host country. However, one needs to focus on the motive of floating such companies and whether they are being fully operated from within India. 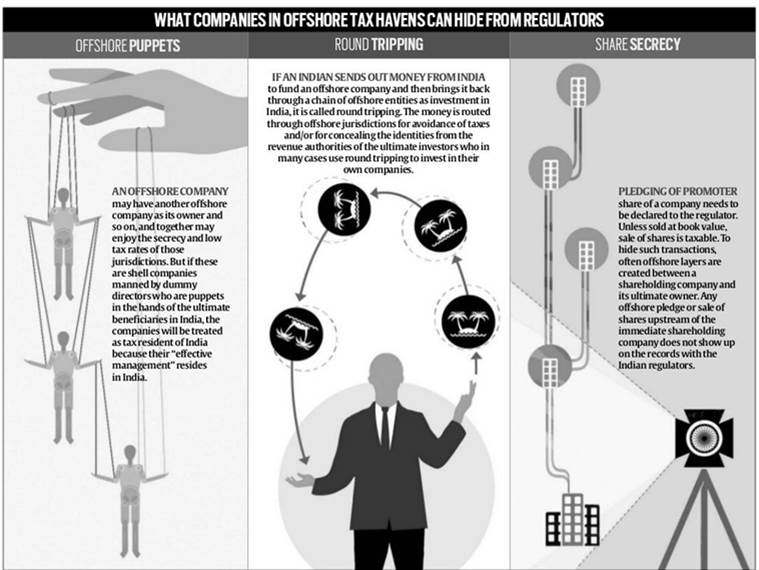 What the Paradise papers reveal is that many of these offshore companies are “sham” entities created merely for the purpose of “tax evasion/avoidance, manipulation of the market, money laundering, round tripping (taking untaxed money out of the country through inflated invoices and then bringing it back as investment), parking black money, bribing, etc”.

For the Indian government that has been particularly focused on reigning in tax evaders and black money hoarders, these documents do provide a peek into the way corporates and individuals use offshore entities to evade their country’s tax net.