The veteran party leader claimed that tickets for the elections to Municipal Corporation of Delhi were being sold for money. He alleged that tickets in his constituency were given to ‘outsiders’.

Walia held several key portfolios in the Sheila Dikshit government in Delhi including the all important health ministry. He said he was pained as he worked tirelessly for the party for years but no one listens to him now.

The resignation is a huge setback to the Congress just ahead of the MCD elections.

The Congress had on Sunday released its second list of 127 candidates for the MCD polls. It had announced the first list of 140 candidates on Saturday. In all, names of 267 candidates have been announced so far. 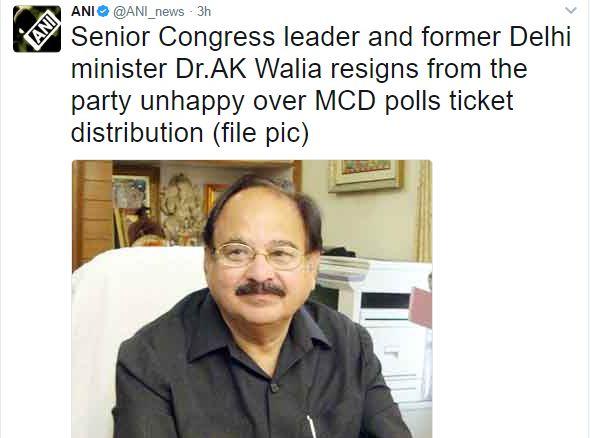 A number of first-timers have been fielded by the Congress in the elections. Youth leaders have been given preference over experience and also factoring winnability. The nomination process for elections will close at 6 PM
on Monday.