Day after 55-year old Pehlu Khan succumbed to injuries following an attack by gau-rakshak in Alwar and being framed as a cow smuggler, it has emerged that he was a dairy farmer. Pehlu Khan was beaten up along with his sons and other Muslim dairy farmers on Saturday by a mob of cow vigilantes. He succumbed to his injuries on Monday, leading outcry over increasing cow vigilantism. Through various media reports, it has emerged that he has always been a dairy farmer and even had a receipt as a proof that he legally bought the cow. Khan along with his sons Irshad and Aarif set out to a cattle festival in Jaipur to fetch cheap cows to double their family’s milk production. He was accompanied by other Muslim dairy farmers of Jaisinghpur village in Mewat.

On his way back to home when he had already bought the cow after paying Rs 45,000 he and his companions were caught by an angry group of cow vigilantes. The group was bringing back their purchase from the cattle fair in two different trucks. The truck was stopped and all of them were dragged out and beaten. They were beaten up with sticks and belts till the time they fell unconscious.

You can watch the video of the attack here:

According to Aarif, the police had reached the spot within 20 minutes of the incident. That didn’t help as they had already fallen unconscious. At the same time, as per media reports, the Rajasthan Police has filed a case against Khan and others for illegally smuggling cows as they didn’t have valid documents to show. However, Pehlu’s son Irshad claims that they had all the required document. 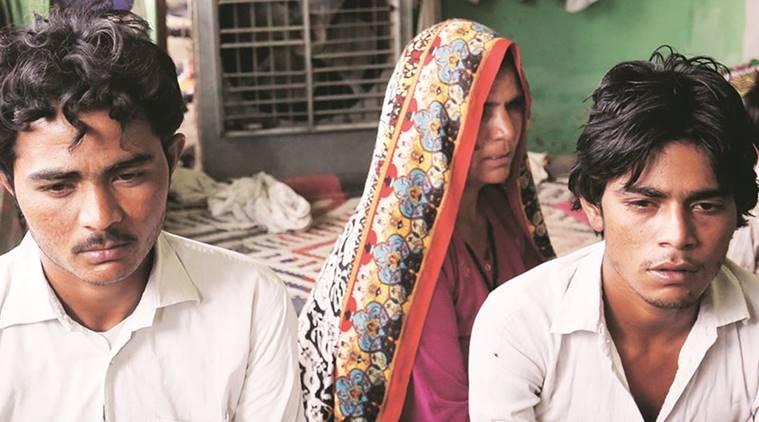 (The grieving family of Pehlu Khan. His wife and sons Irshaad and Aarif)

The Indian Express reports that Irshad showed their report a stamp of the Jaipur Municipal Corporation complete with the serial number 89942 and dated April 1. They invested Rs 45,000 in buying the cow. He also alleged that the mob took away their money and cell phones. Irshad said that he was looted of Rs Rs 75,000 while another person had to part with Rs 35,000.

Indian Express also quoted Zakir Khan, who buys milk from the smaller dairy farmers in the village as saying that Pehlu Khan was one of his suppliers. He even provided the paper with records showing Pehul’s son, Irshad has been doing this work for the last four years and that he has bought cows from Jaipur earlier too.

As per latest report, two FIRs have been filed against Pehlu Khan’s family. On the other hand, the Police hasn’t been able to nab the six people named in the attack. The Indian Express identifies them as Hukum Chand, Jagmal, Om Prakash, Sudheer, Rahul Saini and Navin Saini.