Actor-turned-politician Kamal Haasan, who is ready to launch a mobile app for his political party on November 7, has surely attracted enmity of the Hindu right-wing groups and the BJP with his controversial statement on ‘Hindu terror’. His statement was met by a lot of criticism by the Hindu right-wing group, Akhil Bhartiya Hindu Mahasabha, whose vice-president Pt Ashok Sharma remarked that people like Kamal Haasan should either be hanged or be shot dead.

#KamalHaasan stop your dirty politics. if you have guts do talk about Islamic Terror which the world is suffering… #KamalHinduTerrorTheory pic.twitter.com/PLknNOmZpj

And not just political parties, the actor drew flak from a lot of people, in general. Soon after his ‘Hindu terror’ remark, a defamation case was filed against Kamal Haasan in Varanasi for hurting religious sentiments. Kamal Haasan has responded to all the hate coming his way.

Last week, commenting on the Hindu right-wing groups, Kamal Haasan wrote in the Tamil weekly Ananda Vikatan magazine, “In the past, Hindu right-wing groups would not indulge in violence, but hold a dialogue with opposite parties on their arguments. But this old tactic was defeated and they started using muscle power. They started indulging in violence. The right-wing cannot challenge anyone asking the question — show me one Hindu terrorist. Terror has spread into their camp as well,” as per a report by the Indian Express. 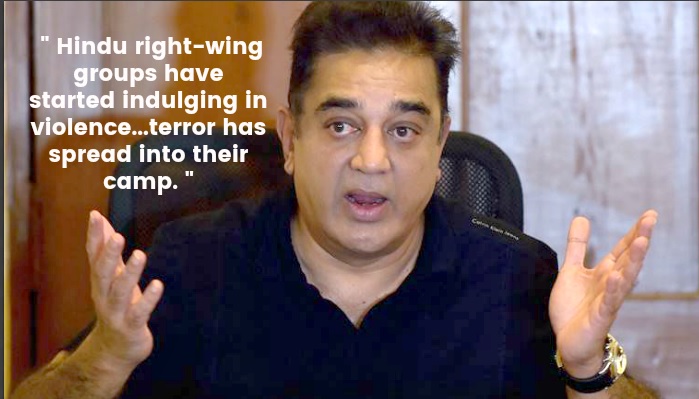 While he was slammed by many, he also found a few supporters in politicians like the Kerala Chief Minister Pinnarayi Vijayan and several other Congress leaders and Tollywood actors spoke up for the actor.

If instilling fear in the name of religion..culture..morality is not terrorizing..than what is it ..#justasking pic.twitter.com/hs8Y3H700L

Hitting back at ones who want him killed for voicing his opinion, the actor said, “If we question them, they call us anti-nationals and want us jailed. Now since there is no space in jails they want to shoot us and kill us, ” IANS reported. Further talking to journalist Barkha Dutt in an event, he said, “Theeviravadhi [extremist] and Bayangaravadhi [terrorist] are two different words. I deliberately didn’t use the latter because I was careful not to offend the Hindus in my own family,” in a report by the Hindu.

The actor has now announced the launch of a mobile application  of his political party on his 63rd birthday on November 7.