Dangal actor who has been in the eye of a storm for her social media posts appealing Kashmiris to not look upto her as a role model today had a Twitter spat with Minister of Youth Affairs and Sports Vijay Goel. The BJP leader tweeted painting of a woman wearing burqa, tagging Zaira Wasim in the comment:  “This painting tells a story similar to @zairawasim, our daughters are breaking the cages of oppression. More power to our daughters! ” This comment irked the Dangal actress, who played the role of a young Geeta Phogat in the blockbuster Dangal. She said: “Women in hijab are beautiful and free.” She also added: “Sir, with due respect to  you I feel I must disagree. I request you not to connect me to such a discourteous depiction.”

Vijay Goel had shared this image while tagging Zaira: 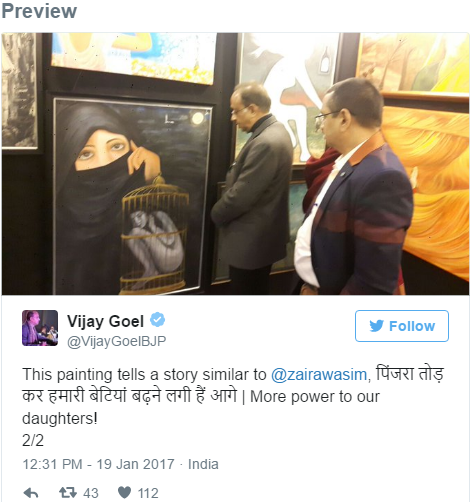 The image disappointed Zaira. And here’s what she had to say: 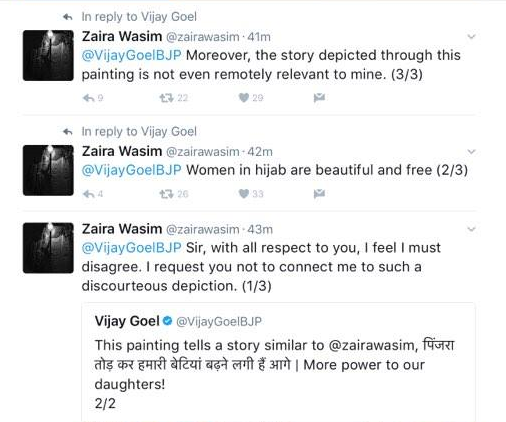 The 16-year old faced social media backlash in Jammu and Kashmir for meeting the state’s chief minister Mehbooba Mufti. She was also bullied by Islamic hardliners for acting in Bollywood films. A week back she made her sense of hurt public on social media. She wrote: “I’m a just a 16-year-old girl and I hope you treat me accordingly. I’m sorry for what I did but it was not a deliberate decision and I really hope people can forgive me.
There are few more things which are very important and I want to clear them as well. The first and foremost thing is that I am being projected as a role model for Kashmiri Youth. I want to make it very clear that I do not want anyone to follow in my foot steps or even consider me as a role model. I’m not proud of what I’m doing and I want everyone, especially the Youth to know that there are real role models out there whether they be in this time or in our history.” This kicked up a debate on whether the young achievers of state are under pressure from different forces in the conflict zone.

Read more: Be it Zaira Wasim or Shah Faesal, achievers from Kashmir are walking on a double edged sword

However, she received huge support from entire Bollywood including Aamir Khan. The Phogat sisters, whose biopic she was part of also came out in support of her.