The controversial Imam of Kolkata’s famous Tipu Sultan mosque, who had last month issued a fatwa against Narendra Modi, is facing a backlash from within the local Muslim community for mixing religion with politics. According to a report, over a hundred shops around the Tipu Sultan Mosque were shuttered on Wednesday in show of protest against Shahi Imam Maulana Nurur Rehman Barkati. The Imam had last month promised a reward of Rs 25 lakh for anyone who would “cut off PM Narendra Modi’s beard, shave his head and smear him with black ink.”

A report in the website eNewsroom said that shops around the Tipu Sultan Mosque decided on closing for 24 hours, in a sign of the community’s anger bubbling to the surface against Barkhati. According to several protesters interviewed for the report, Barkhati’s “habit” of issuing fatwas from press conferences inside the mosque was a major reason behind people’s anger. A caretaker at the mosque, Anwar Ali, was quoted as stating that Barkati had no right to speak on behalf of the community.

Ali reportedly raised the issue of the Imam’s political leanings with him in the wake of the preacher urging the Muslim community in Uttar Pradesh to vote the Samajwadi Party this state election. According to the report, the argument got heated up after Barkhati’s two sons came from his side to defend their father.

The situation soon escalated after Barkhati doubled down on his attitude toward politics, which reportedly led to the shopkeepers around the mosque mobilising in protest.

His opinion is not ours. His comments often have a communal tinge. He doesn’t speak for us. It is high time that he gets the message of keeping politics away from the mosque, one of the protesters and a local shopkeeper was quoted as saying. 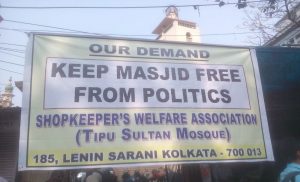 The board at the Tipu Sultan mosque urging the Imam to stay clear of politics. (eNewsroom picture)

According to the report, the resistance to Barkhati’s religious politics is also coming several other Muslim scholars, including the Imam of another local mosque. Khidderpore Mosque’s Ashraf Ali Qasmi reportedly advised Barkhari not to use the mosque to “propagate religious ideologies.”

Barkhati is viewed as being close to West Bengal chief minister Mamata Banerjee, who is a political rival of Prime Minister Narendra Modi. The fatwa against Modi that he had issued last month was announced at the Kolkata Press Club in the presence of Trinamool Congress MP Idris Ali.