BJP spokesperson Sambit Patra fell prey to fake news in a bid to prove NDTV’s alleged agenda against the ruling BJP. Patra, who was a few days back shown the door by the channel’s anchor Nidhi Razdan when he accused it of having an agenda against the BJP government during a debate on government’s notification on cattle slaughter.  The story shared by Patra on Twitter was titled “Make in India” turned out to be a flop shw, reveals data by NDTV with the caption, “Hmm agenda,” something he had accused the channel of earlier as well. The tweet was shared over 300 times. NDTV was quick to point out that the story had wrongly quoted NDTV and that they didn’t have anything to do with the story. Times of Islamabad that published the story is notorious for running fake news on it’s website. 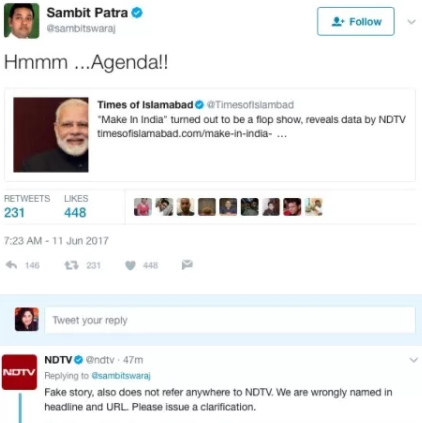 Apart from correcting Patra, NDTV also asked the Times of Islamabad to correct the mistake and apologise. 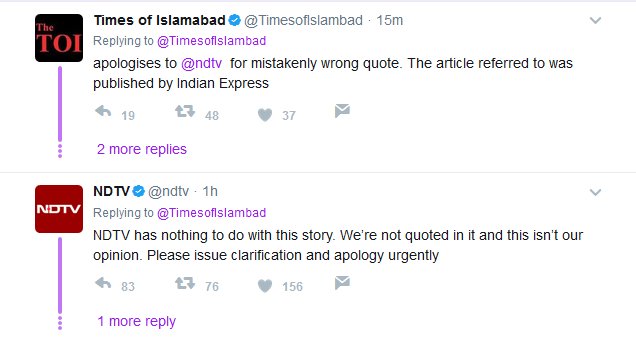 NDTV anchor put things in perspective by sharing another fake story, this time against the BJP fountainhead RSS to prove how the website regularly churns out unverified and false content. 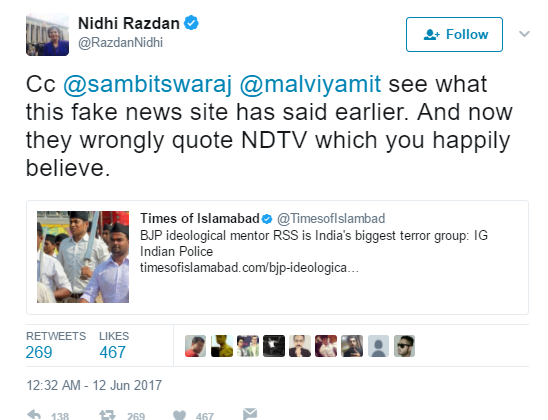 The story that Times of Islamabad was referring to was actually published by Indian Express and written as an opinion piece by former finance minister P Chidambaram. The editorial is titled, “Across the aisle: The Make In India flop show”.

This is not the first time that the BJP spokesperson has been called out for sharing fake news. Earlier, during a debate on Times Now he had shown a photoshopped image of the Indian Army on national television to highlight the conditions under which Army works.