Prime Minister Narendra Modi is currently in Berlin to attend six-day, four-nation tour of Germany, Spain, Russia and France. Meanwhile, on May 30, PM Narendra Modi had a chat with German Chancellor Angela Merkel as both of them met at her country retreat near Berlin for informal talks. During their conversation, both the leaders had a walk on the grounds of Schloss Meseberg which is a Baroque castle in the Brandenburg district of Germany constructed in the 18th century. This ground is the official state guest house of the German Chancellor.

As per the media reports, both of them believed to have discussed issues of mutual interest. Moreover, few pictures were also shared on the official Twitter handle of PM Narendra Modi along with a caption which said,”Had a very good interaction with Chancellor Merkel.”

Had a very good interaction with Chancellor Merkel. pic.twitter.com/5SQb5l205M

Our Prime Minister shared this picture to let us know how is spending his time on the tour but the Indian Twitterati took the Modi-Merkel meet to an another level like pros. Actually, the things began with a Twitter user called Sagar (@sagarcasm) posted a picture and asked others to caption it. 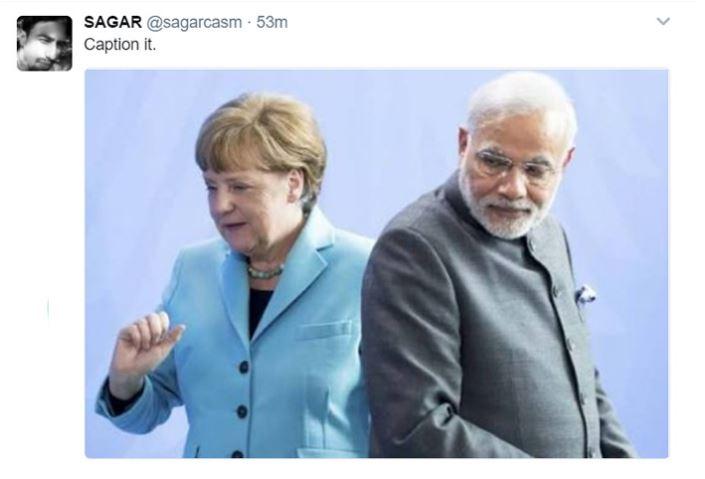 In response to his post, the rest of the Twitterati erupted in such a way that this ‘image naming contest’ would win them some exotic prize. However, the captions with which they came up will literally make you ROFL.