A woman from Rajasthan has taken an unusual yet effective route to break gender stereotypes.

According to the bindori tradition, relatives invite both the groom and the bride for a feast before the marriage. So the groom has the privilege of riding a horse and leading a procession till their house after the feast.

However, Gargi changed the ritual by hopping into a horse drawn carriage and leading pre-wedding procession at Chirawa town in Jhunjhunu district, Times of India reported

Gargi, an MBA graduate from UK, says she has been going around in different localities in Jhunjhunu for the last three days to send a message that girls are in no way inferior to boys. 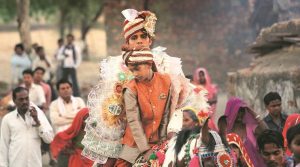 ” People in rural and semi-rural areas can be influenced by action but not by articles in newspapers or TV shows. My mother is campaigning for ‘Beti Bacho, Beti Padhao’.

Gargi is set to marry Delhi-based Kushal in Udaipur on February 8 followed by a reception in Delhi on February 10.

Her mother Santosh Ahlawat says changing the patriarchal mindset is extremely important to eliminate the gender divide in the society.

“My district had skewed sex ratio which I fought like a warrior. Things have improved a lot in the last few years as awareness has increased with Prime Minister Narendra Modi’s ‘s focus on ‘Beti Bachao’ campaign,” she said.