Kerala seems to lead the way when it comes to LGBT and women rights. First it was India’s first ever transgender meet in Thiruvananthpuram in April followed by the hiring of transgenders at Kochi metro. Also with highest literacy rate and sex ratio in the country, rest of India can learn a lot from the state.

In the latest initiative, nearly 1,200 unaided schools in Kerala under the banner of All Kerala Self Financing School Federation (AKSFSF) have decided to grant their female teachers additional 12 days paid leave every year during their periods. The move is likely to benefit nearly 60,000 school teachers, who will now be able to take a day off during menstruation.

The Federation made the announcement at a press conference held in Kozhikode on Monday.

“As menstrual awareness is gaining strength worldwide, many organisations and workplaces across the country are offering paid menstrual leave for their women employees. We thought why should we stay behind?” says Ramadas Kathiroor, who is the president of AKSFSF.

Also Read: 7 transgenders who fought hard to achieve their dreams despite social boycott

“The teachers can avail the leave on any day of the menstrual cycle, and it need not necessarily be the first day. This will benefit the women staff, who won’t have to drudge physically on these days”, he added.

In another great news for trangender community, the Federation announced that they are planning to recruit qualified transgender individuals on teachers post.

“We are spearheading this change for bringing the transgender community into the education sector and will hire candidates who will fulfill the eligibility.” he said. 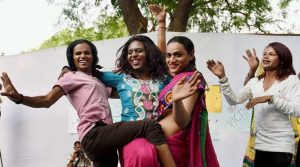 Underlining that the teaching post would require a minimum B.Ed degree, he added, ” We are open to appointing even candidates who have the teaching qualifications for kindergarten students.”

“Transgender individuals would get priority whenever there is a vacancy in a local school. Vacancies would be created if the individuals are qualified,” Ramdas Kadirur told The Hindu.