Mulayam said in a handwritten letter to Amar: 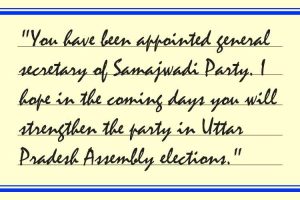 Though SP big wigs were strongly opposed to Amar Singh, often described as an “outsider”, Mulayam threw his weight behind him, first by making him a Rajya Sabha member some time back and now allotting him an important party post.

With inputs from PTI