Justice Markandey Katju is back in the news. This time, he has thrown an open challenge to Jawaharlal Nehru University (JNU) students Kanhaiya Kumar, Umar Khalid and Shehla Rashid. Calling them “fake revolutionaries”, Justice Katju openly challenged the three feisty “heroes/heroines of JNU” to say the two statements that he has posted on his Facebook page.

He said: “If you are real revolutionaries, and not fake, say openly, as I say, the following:
1. There is nothing wrong in eating beef, and laws against cow slaughter should be repealed. To call a cow as ‘gomata’ is the height of stupidity.
2. Burqa should be banned as in France (women should be given no choice in the matter ), and the stupid, outdated sharia should be replaced by a uniform civil code.” 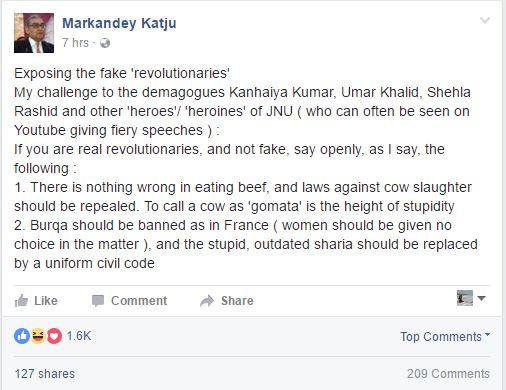 Often critical of the Narendra Modi government, Katju had written an open letter to the Prime Minister just a few days back saying: “Modiji, pardon me for saying so, even after almost 3 years of your rule, I am neither seeing vikas nor achche din, rather I am seeing mandi, girawat, berozgari and bure din.”