With the onset of annual Kaawad Yatra, authorities have launched a mobile app to ensure smooth movement of Kaawariyas along all districts of Meerut division which also includes Delhi’s neigbouring- Noida and Ghaziabad cities.

Divisional commissioner of Meerut Anita Meshram has directed all the concerned departments to promote Kaawad Yatra Management App in all possible ways.

The app, available on android devices, is useful in locating all the kanwar camps and other facilities. It also helps the user to track essential services like fire services, police stations, hospitals, medical facilities along the route. The app will add contact details of officers on duty at each of these centres.

“Around four crore yatris are expected to participate in he yatra this year. I have asked all officials of the fire department, power corporation, administration, police, etc. to download this app from Google Play Store and use it optimally,” Meshram told Times of India. 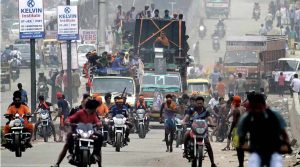 According to Gautam Budh Nagar ADM Kumar Vineet, approximately 15,000 pilgrims are expected to pass through Delhi’s neighbouring district, with many more converging at various temples, Indian Express reported. The administration is streamlining efforts to regulate the flow of traffic while pilgrims make their way on foot.

Kaawad Yatra drew a lot of flak in national capital region last year, thanks to traffic chaos at day hours and the high decibel songs played by some of the kaanwariyas at midnight causing lot of inconvenience to the residents.