Rajasthan Police have arrested two people in connection with the death of a Dalit man who was lynched by a mob on Friday over an alleged affair with a Muslim woman.

Khetram Bhim, 22, used to work at the home of a man called Mehboob Khan and was reportedly in love with a girl in the family.He had been warned in the past to stay away from her after they were caught together, NDTV reported.

On Friday, two men Sadam Khan and Haiyaat Khan called Khetram to their field where a group of seven men were waiting for him, Khetram’s brother Hariram Bhil told local reporters.

They tied his hands and beat him mercilessly till he died. His body was then thrown some distance away. Bhim’s body was found three days later. 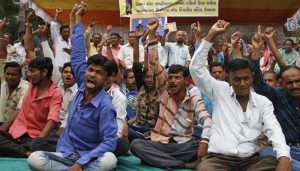 “The hands and legs of the victim were tied before he was beaten,” Chohtan circle officer Surendra Kumar told Hindustan Times. Bheel’s body was found 500 metres away from the spot where he was attacked. He said it seemed that the victim had tried to escape but died on the way.

Rajasthan: A 22-year old Dalit man beaten to death by a group men in Barmer allegedly over an affair with a Muslim woman. Surinder Kumar, DSP Barmer says, “The man succumbed to severe injuries. Two people have been arrested so far, further investigation is underway.” pic.twitter.com/t51QRQ1asM

According to police, the post-mortem report revealed that the deceased was severely beaten and that the attackers also tried to strangle him.