In a heartfelt gesture, residents of Gurgaon have installed a community fridge to reduce the wastage of food and to ensure that no one goes hungry. Nearly 30 families from Sun city Gurgaon Sec-54 took the initiative last month as they collectively bought the fridge to store it with leftovers from last night’s meal or food that they no longer need.

“This is part of a bigger initiative we are trying to implement in our society. We began waste management and segregating the dry waste that is recyclable. Over 30 families were involved in the initiative. While we were doing that, we thought of also working towards reducing our food waste,” Rahul Khera, IT professional and one of the minds associated with the initiative, told The Hindustan Times.

The idea of a community fridge has become popular worldwide and India is fast catching up to it With this, Gurgaon has now joined the leagues of Mumbai and Kochi that started a similar initiative last year. The fridge has been placed near the exit gate of Suncity Flats.

“We bought a display fridge with a glass door, posted about it on social media, and received an overwhelming response… On the first day, I went there a couple of times, and every time I went, I found new packets in the fridge,” HT quoted Khera as saying. 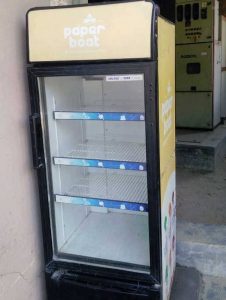 The people involved in this project are also enocuraging other to donate surplus food for the fridge, or start one of their own.

After the overwhelming response, Khera and his friends are planning to

“I’ve received response from several Gurgaon residents enquiring about it, as they want to do something similar in their society. People have called to even extend monetary help.We plan to expand it at other locations within and outside Suncity,” he said.