Mumbai on Tuesday witnessed the heaviest downpour in a decade that threw normal life out of gear. Several parts of the city were inundated with as much as chest-deep water as it received record 298 mm (almost 30 cm) rainfall between 8.30 a.m. and 5.30 p.m. yesterday. It was nine times more rain than the average, an IMD official said. The road, rail, and air traffic were severely disrupted and people were forced to abandon their vehicles in midway.

All educational institutions have been asked to remain shut today while many offices declare it a non-working day, some others have advised employees to work from home. Mumbai’s suburban train network also came to halt that led to severe inconvenience to commuters. Though the mayhem in the maximum city got everyone’s attention, there are other parts of the country which have also been ravaged by heavy rains. The death toll and destruction in these regions is also grave. 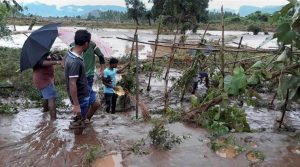 Triggered by low pressure, the state also received heavy rainfall creating flood like situation in three of its southern districts on Monday. The incessant rain in Kalahandi, Malkangiri and Nabarangpur districts caused several rivers to be in spate and inundate over six villages and snap the road links, officials said. Rivers like the Sileru, Saberi, Saptadhara, Poteru and Tamasa were in spate, inundating vast areas. The situation has improved slightly as water began to recede, though the road connectivity remained affected. Meanwhile, the meteorological centre here forecast more rains and thundershowers at most places of Odisha over the next 24 hours. 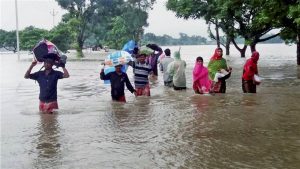 Over 500 people have died in the state which is facing its worst flood in decades. While water is receding some places and people are returning home, the crisis is still far from over. Nearly 116 relief camps are functioning now in which 1.38 lakh people are staying. The incessant rain followed by the opening barrage in Nepal had led to the unexpected rise in water levels in various rivers including Kosi, Gandak, Budhi Gandak, Kamla, Baghmati etc. Around 19 districts have been affected, a report of state disaster management department said. 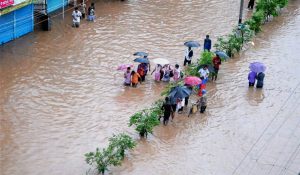 Assam is currently witnessing its third wave of flood that has claimed 74 lives. Over 1 lakh people were still affected by floods in its four districts. The total casualty in this year’s flood-related incidents in Assam has gone up to 158. The rail link to north-east was temporarily cut-off due to flood. Authorities are running 70 relief camps and distribution centres across five districts, where 21,049 people are taking shelter. 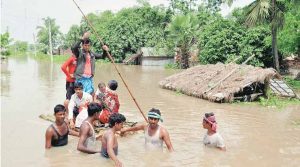 Six northern districts of West Bengal have also been ravaged by flood. So far, close to 1.5 crore people have been affected in the floods in the state while the state has lost an estimated Rs 14,000 crore in the deluge. The death toll, however, has remained at 90. Nearly three lakh houses were fully damaged while close to 55000 were severely and over 52000 were partly ruined, as per a report of the disaster management department. 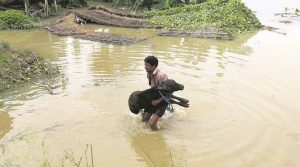 Over 100 people have been killed in the flood related incidents in Uttar Pradesh. As many as 3,128 villages are flood-affected, while the number of marooned villages stood at 2,061 till Sunday. A number of people have taken shelter in various relief camps. Rivers Rapti, Ghaghara, Burhi Rapti, Rohini and Quano are in spate and have inundated vast areas in Lakhimpur Kheri, Barabanki, Faizabad and Ballia, Gorakhpur, Siddharthnagar.