Upset at not being able to meet Prime Minister Narendra Modi, a woman torched a bus in Varanasi on Wednesday. The woman, who has actively been campaigning for a separate Purvanchal state, claims she was stopped from meeting the Prime Minister by the police and hence set the bus on fire.

At around 11 am on Wednesday, Vandana Raghuvanshi, secretary of the Poorvanchal Jan Andolan Samiti, climbed a state-run Volvo luxury bus bound for Lucknow. She asked the two-three seated passengers to vacate the vehicle, following which she proceeded to douse petrol over the seats and set it alight, said Dinesh Kumar Singh, superintendent of police (Varanasi). No passengers were injured in the fire. The bus was partially burnt by the time fifteen firemen managed to douse the flames.

Reportedly, Raghuvanshi also distributed pamphlets at the bus stand mentioning her demand for a separate Purvanchal state to be carved out of Uttar Pradesh. 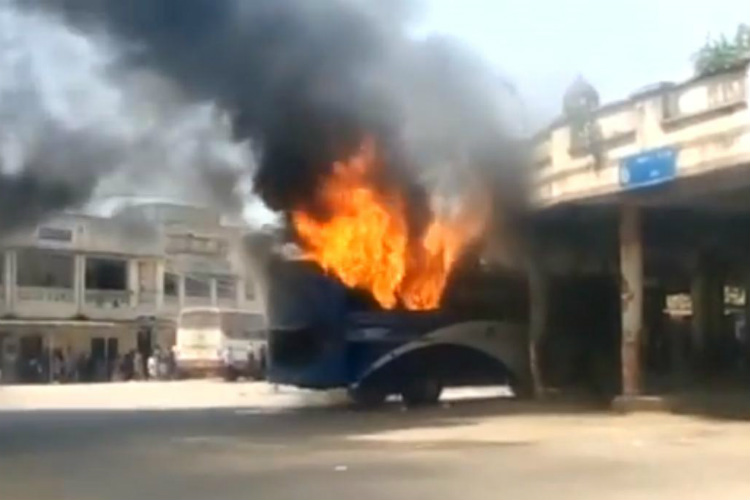 Raghuvanshi wished to meet the Prime Minister, who was visiting his parliamentary constituency of Varanasi, to press for her demands of a separate state. She says she had tried meeting the PM and Uttar Pradesh Chief Minister Yogi Adityanath several times before, but all her efforts had been in vain.

ALSO READ: #FacepalmAlert: A Wedding Was Called Off In UP Due To Bride’s ‘WhatsApp Addiction’

According to police, Raghuvanshi was also on an indefinite fast after August 15 to highlight her cause, however, the strike ended as she was force-fed on August 29 when her condition worsened. She says that the media did not cover her agitation when she held peaceful demonstrations, hoping that after setting the bus on fire, her message would reach PM Modi and Adityanath.

Modi had visited Varanasi on Monday and Tuesday on the occasion of his 68th birthday on September 17.

(With inputs from PTI and IANS)