At a time when moral policing by media is considered as the lowest form of opinion formation, a Facebook post by a Guwahati man against a fellow journalist has gone viral on the social media.

Partha Satyanveshi, who works as an Assistant Editor at the NorthEast Today, criticised a fellow journalist who goes by the name of Afnur Ali on Facebook and works for a regional media house Dy365, for posting a photo of women in sarees outside a liquor shop with the caption ‘Saraswati puja special’. Here’s a screenshot of Afnur Ali’s post: 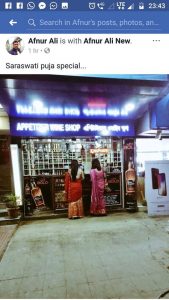 Addressing his post to another senior journalist from the media organisation, Satyanveshi questioned him if it was wrong for a girl to buy her drink from a wine shop? Here’s what he wrote:

ALSO READ: You probably don’t know this but Guwahati is hosting a World Boxing Championship 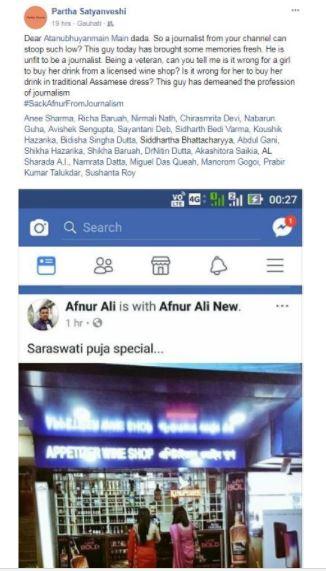 Satyanveshi slammed the journos for not being responsible enough while sharing information from their personal social media handles and demanded immediate termination of the Dy365 journo Afnur Ali.

ALSO READ: This Guwahati man risked his life to save leopard stuck in 30ft well

His post soon went viral on the social media and invited a similar response wherein people slammed journos for gender profiling and discrimination. Check out some of the reactions here:

According to a report by the Guwahati Plus, one of the journalists was forced to apologize following the social media outrage.