Days after rejecting Thomson Reuters survey that rated India as the most dangerous country for women, National Commission for Women Chief Rekha Sharma has claimed that 30 percent of rape cases reported in the country are ultimately found to be fake.

“There are many fake cases (of gangrape). Around 30 percent of cases are fake. There is a property issue and they will include a line that a person has sexually abused me, touched me there.” she told Huffpost in an interview.

Sharma, a former media in-charge of the Haryana BJP, also suggested that there was a spike in reported gangrapes after compensation was hiked following the Bulandshahr gangrape case

“When they increased money for gangrape in Uttar Pradesh, suddenly the number of complaints increased for the gangrape — all in similar areas. So these things happen — if you study about it,”

However, she did not provide any data to back up her claims.

She reiterated her dismissal of Thomson Reuters survey’s findings saying it is based on the perception of a few people whose names the agency has not revealed. 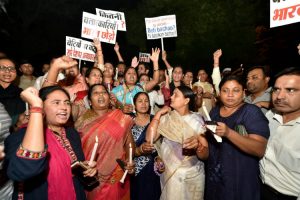 She also claimed that sexual violence is closely related to education and the more ‘gruesome’ rapes India has witnessed has been perpetrated by men with less education.

However, she agreed that a lot of sexual harassment happens at the workplaces but the degree of abuse varies according to the education level of the abuser.

“Of course, a lot of sexual harassment happens at workplaces. But if you compare the number of cases, and the gruesome cases that you are seeing whether it is Nirbhaya or some other such case, there you see the difference.”