It’s not very unusual in India to come across stories where people perform bizarre stunts to get attention. We have seen people using their ponytails or even beards to pull vehicles. However, this latest spectacle by a holyman in Uttar Pradesh definitely takes the cake.

A Hindu monk achieved an astonishing yet bizarre feat after he pulled a van by using his penis only.

The holy man was photographed in action at annual Magh Mela festival in Allahabad on Januray 2 where thousands of devotees flock to take a dip in Sangam, the confluence of Ganga and Yamuna. 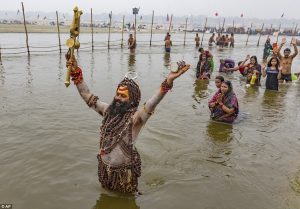 Some Sadhus perform stunts to prove their physical and spiritual stength. For example, a man with the name Radhey Shyam Prajapati holds the Guinness World records for standing motionless in the water for the longest time (8hrs:5mins:5secs) and Rajikumar Chakraborty holds the record for the longest static wall sit (11hrs:5mins).

Last year, a kung fu trainer became a new world record holder after he towed seven cars with his testicles.

Scores of people, as well as official adjudicators, watched Ye Hongwei towing the vehicles with a rope tied around his genitals.