A simple mock drill that was supposed to prepare students for possible emergency situations turned into a nightmare for the students of a private college in Tamil Nadu’s Coimbatore district. A 19-year-old girl lost her life during a mock drill being conducted at a private college in Tamil Nadu’s Coimbatore district on Thursday.
According to The Hindustan Times, the mock drill was conducted by the National Disaster Management Authority. A video that is being widely circulated on social media and the allegations by the eyewitnesses, the victim, N Logeswari, a second year BBA student from Kovai Kalaimagal College of Arts and Science, was reluctant to jump and was pushed by the trainer TR Arumugham before she fell hitting her head to the ledge of the floor below. The Trainer has been taken into custody. 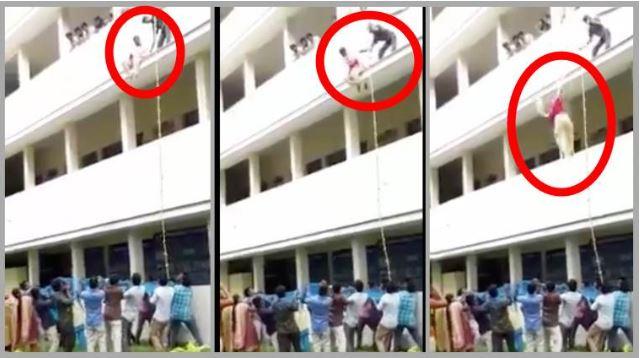 The Hindu reported that Higher Education Minister K P Anbalagan has assured that an inquiry will be conducted and actions against those found guilty will be duly taken.
Contrary to the college authorities’ information that the mock drill was being conducted by NDMAI, Rajendra Ratnoo, Commissioner (Disaster Management), Tamil Nadu State Disaster Management Agency, which functions under the NDMAI claimed that he was unaware of the same. “All training sessions of the NDMAI are conducted only through the District Collector,” he told the newspaper.
Based on preliminary inquiry, the police said that the victim who is a resident of Ration Shop Street in Nathegoundenpudur near Alandurai, was sixth in the line to attempt the jump. Before her, 5 people had successfully completed the task. She sustained head injuries and was rushed to a private hospital in Thondamuthur, where she was administered first aid. On the reference of doctors, she was then taken to State-run Coimbatore Medical College Hospital by the doctors, where she was declared “brought dead”.
According to India Today, a similar incident happened in Bangalore in 2012 where a 22-year-old woman died at a garment factory during a fire drill being conducted by the state fire services department at the garment factory where she worked. The rope which she was using lower herself down the building snapped around the second floor and the woman fell to the ground hitting her head to the floor.
Trending
photos