Two Union Ministers, a governor and other key BJP leaders will be trying their hand at acting in this year’s Ramleela that will be staged at Red Fort grounds in New Delhi from October 10 to 18.

Luv Kush Ramleela Committee, the organiser of the event, said that Union minister for science and technology Harsh Vardhan will essay the role of King Janak, father of Sita, while Minister of State for Social Justice and Empowerment Vijay Sampla will be playing Himavat, father of the goddess Parvati, wife of the god Shiva, Hindustan Times reported.

Apart from the union ministers, Assam Governor Jagdish Mukhi will be in the role of the tribal king Nishad Raj while Delhi BJP chief Manoj Tiwari will again be seen in the role of Angad, the son of Bali. Vijender Gupta, another veteran BJP politician and leader of the Opposition in the Delhi legislative assembly will portray the character of sage Rishi Attri. 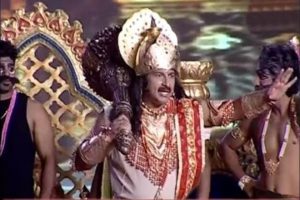 Interestingly, the roles chosen by the politicians have a limited, one-day appearance at the nine-day event which seems to be more symbolic the substantive.

In last year’s Ramleela, Manoj Tiwari, who is also a popular Bhojpuri actor, referred to the surgical strikes conducted by the Indian Army while playing the role of Angad.

While enacting the well-known story of Angad putting down his leg firmly in the court of king Ravana, Tiwari warned his soldiers “listen, if you even dare to come near me, I will bury you two and half feet under the ground.”