Union Minister for Women and Child Development, Maneka Gandhi, has now offered an apology for her recent transphobic remarks in the Parliament. While discussing The Trafficking of Persons (Prevention, Protection and Rehabilitation) Bill, 2018 in the Lok Sabha on Friday, Gandhi had referred to trans persons as “the other ones”, triggering an inflamed response throughout the community.

Posting an apology on Twitter, the Union Minister stated, “I sincerely apologise for using the term ‘other ones’ during the debate on the Trafficking of Persons (Prevention, Protection and Rehabilitation) Bill, 2018, in Lok Sabha.” Justifying her laughter while making the controversial remark, she added, “I did not ‘snigger’, I was embarrassed at my own lack of knowledge.”

I sincerely apologise for using the term ‘other ones’ during the debate on the Trafficking of Persons (Prevention, Protection and Rehabilitation) Bill, 2018, in Lok Sabha. I did not ‘snigger’, I was embarrassed at my own lack of knowledge.

The Union Minister also assured that the Anti-Trafficking Bill is gender neutral and the error would not be repeated.

I was not aware of the official terminology for the transgender community. In future, all official communication will use the term TGs. I would like to assure that the #AntiTraffickingBill2018 is gender neutral and provides protection to the aggrieved.

Speaking in the Lok Sabha during the Monsoon session of Parliament on Friday, Gandhi had said, “The Bill focuses on the victim (of trafficking). If a voluntary sex worker is not a victim, has not been trafficked, has no one to blame for his or her problem; or other ones.” She later corrected herself upon being prompted to refer to trans persons as “TGs”, inviting indecent laughter from fellow MPs. Her remarks came in response to Congress MP Shashi Tharoor’s concerns over harassment of consenting sex workers. 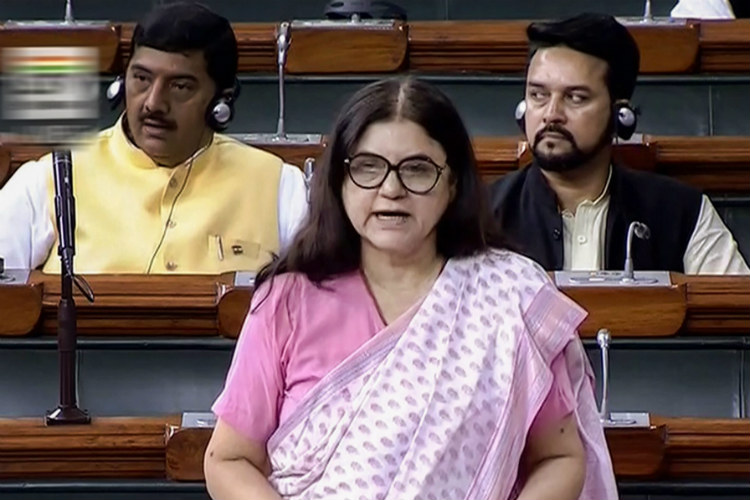 Gandhi’s transphobic remarks triggered an angered response from Meera Sanghamitra, a member of the National Alliance for People’s Movements, who condemned the remarks, terming them “extremely reprehensible, derogatory and insensitive.”

. @Manekagandhibjp We are #NotOtherOnes or your pets. We are equally human, equal citizens. APOLOGIZE to the entire transgender community NOW, for your extremely derogatory, insenstive reference and gesture. This does not behove a Cabinet Minister! Appalled, Anguished, Ashamed ! pic.twitter.com/v9uPwm8VEj

Speaking to The News Minute, trans writer Nadika Nadja raised concerns about Gandhi even as she apologised, saying, “I would have been less worried if Maneka was just mocking us.”

“That someone – a long time politician who claims to understand women’s issues – can openly admit she doesn’t care enough to learn about trans issues, and then pretend like she wasn’t laughing about it, is deeply troubling,” she said, adding that the correct terminology would be ‘transgender man/woman’, ‘trans man/woman’, or ‘trans person’.