Very severe cyclonic storm Cyclone Vardah has made its landfall near Chennai. The landfall is likely to complete in the next four hours. Tamil Nadu Chief Minister O Panneerselvam and Andhra Pradesh Chief Minister N Chandrababu Naidu are keeping a close tab over the situation.

Indian Navy ships Shivalik and Kadmatt have been kept on standby to provide immediate assistance if required. One additional Indian Army column has also been placed on standby. A total of seven Army columns are currently on standby. Nearly 19 teams of the National Disaster Response Force (NDRF) have also been deployed in Andhra Pradesh and Tamil Nadu.

Meanwhile, all operations at the Chennai airport have been suspended till 9 pm today.

Hundreds of people living along the sea coast have been evacuated to relief camps. Heavy rains due to the influence of severe cyclonic storm Vardah continue to lash the area.

Stay tuned for live updates and images from the ground:

Cars floating on air… The mighty fury of #cyclonevardah pic.twitter.com/x2URayyCuV

5:15 pm: Home Minister Rajnath Singh speaks to Tamil Nadu CM O Panneerselvam regarding the situation in the aftermath of the cyclone

Tamil Nadu Police has advised people to not park their vehicles near the trees #Chennai #cyclonevardah pic.twitter.com/McSsLyQHLC

4:35 pm: At least two people have been killed in cyclone related incidents 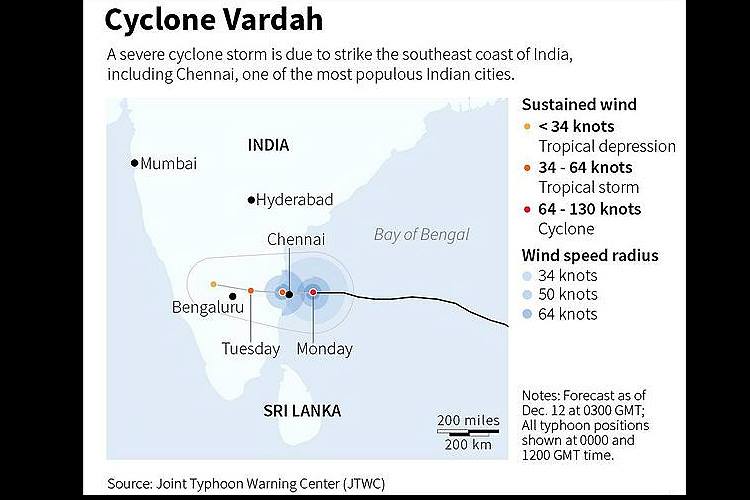 4:35 pm:Preventive measures have been taken and an advisory has been issued. People likely to be affected have been evacuated: Harsh Vardhan, Union Science & Tech Minister

4:00 pm:Some trees and electric poles have fallen due to that, NDRF has begun its operations to clear this: RK Pachnanda (DG, NDRF)

My street, Besant Nagar. We keep passing under it. I hope those cables are of good quality. #cycloneVardah pic.twitter.com/XXr7dzcAdy

3:40 pm: Ship that was sent to rescue two fishermen off Kakinada(AP) couldn’t reach them due to rough sea: AP Coast guard DIG Haribola

(Don’t gimme a 100-crore fine). This is what India looks like, temperature wise today per Cameron Beccario’s tool. pic.twitter.com/OpxbHmxspU

2:45 pm: Very severe cyclonic storm Cyclone Vardah has made its landfall near Chennai. The landfall is likely to complete in the next four hours

Cocos Nucifera holding strong so far but some coconuts have fallen pic.twitter.com/2m6BvsbJRF

## One additional Indian Army column has also been placed on standby. Total Army columns now on standby is Seven.

Deployed 6 teams in AP, 7 in TN, can handle any situation. Shifted ppl to safer places and educated them abt precautions: Santosh Kumar NDRF pic.twitter.com/a6rZsuy4X0