The students of Jawaharlal Nehru University have been agitating to get the proposed fee hike rolled back for weeks now and adding to this are the anti-CAA protests. In the midst of these, on January 5, masked men and women entered the campus, hitting students and destroying public property. This attack has led to fresh dharnas inside the university campus which have been covered by the media extensively. A photo of a research scholar and queer activist, Kaushal Bodwal, who has been photographed and interviewed by many publications, has been picked up by some on Twitter for his gender non-conforming attire.

Kaushal Bodwal, who was a part of the protest, was wearing salwar kameez. It caught the attention of many on social media who trolled him.

Here’s what they said: 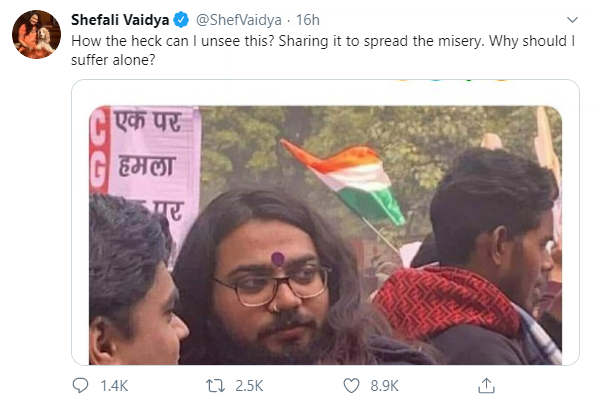 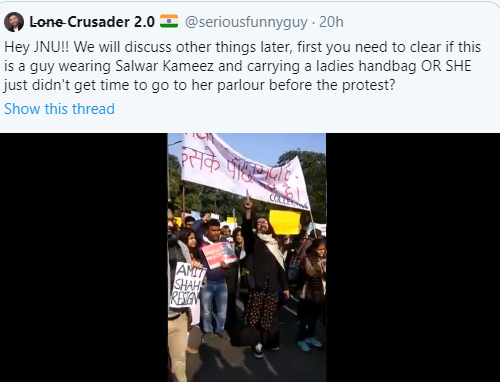 This personal attack was immediately called out by many for being transphobic as well:

Speaking with InUth, Kaushal said, “This is nothing but hatred towards things that haunt you. The gender non-conforming attire haunts the society. It haunts people. I get a lot of nasty comments on my Facebook timeline. Many people ask me weird questions, but there is a bit of sensitivity in their questions. The idea (behind his attire) is to make a bold statement.”

While appreciating the support he got online, Kaushal is vary of the name-calling against Shefali, calling it ‘problematic’. “I appreciate that many people came out in my defense and called her (Vaidya) out for her fascist comments. But I do not agree with people trolling her and calling her ‘aunty’. This is revenge and it is problematic,” he told us.