Amid the escalating political turmoil within the Aam Aadmi Party (AAP), a tweet by Delhi Chief Minister Arvind Kejriwal’s close aide Kumar Vishwas posted three years ago is going viral on Twitter. Kumar Vishwas who has hinted that he may quit the party owing to the current circumstances had written a cryptic tweet years ago when one of AAP’s key member Shazia Ilmi part ways with the party.

AAP’s co-founder who had quit the party in 2014 has come out to retweet Kumar’s three-year-old tweet to target and take a dig at the AAP leader now that speculations are rife that he might leave the party too. In 2014, Kumar had tweeted saying, “Dheeraj, Dharam, Mitra Aru Naari Aapad Kal Parkhiye Chaari.” (Translation:  Patience, Religion, Friends and women are tested in times of adversity) 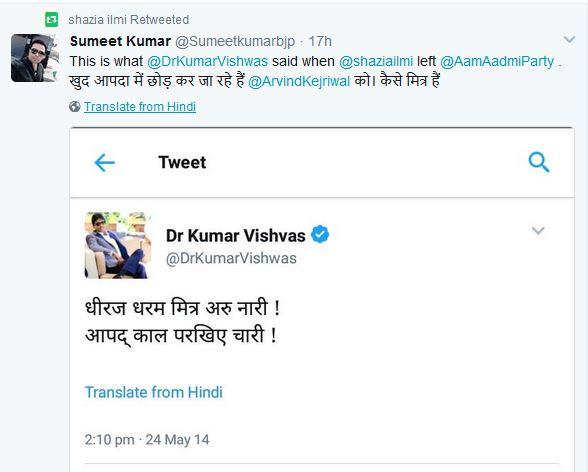 However, Kumar Vishwas wasted no time in responding and asserted that these old tactics will not work

One of the social media user who pointed out Kumar Vishwas’ old tweet replied saying Vishwas was aware of the these tactics even when Shazia Ilmi left the party. Shazia Ilmi went on to retweet this particular tweet too.