A little over a week after a list of “victims of love jihad” went viral, a couple from Kolkata, whose names were mentioned on the list, has received death threats. The couple has now lodged a complaint with the Kolkata Cyber Cell.

The list, which was shared by a pro-Hindutva page on January 28, contained a list of 102 couples where the girl was Hindu and the boy was Muslim. The post urged all “Hindu lions” to “hunt down” all the Muslim men listed.

Soon after it went viral, the page, ‘Hindutva Varta’ was shut down and the post was inaccessible, however, people had already identified the couple and they began receiving death threats on social media.

The couple registered a complaint on February 7 and the police are now looking into the matter. According to an Indian Express report, the couple stated in their complaint, “We… Have been targeted by a group of people… We were further subjected to death threats, so far I am aware of, such situation of causing harm to us, and/or spreading hatred in the name of religion are offences under the India Penal Code, 1860.” 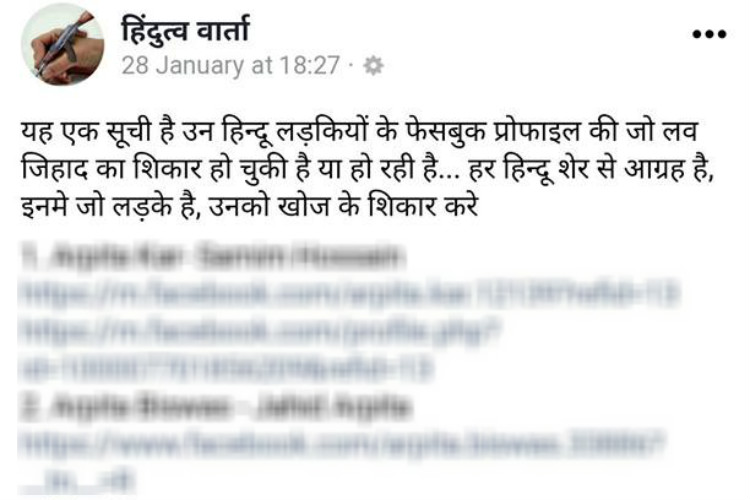 According to the report, the couple came to know about the list when the girl spotted it online on February 4, a week after it was uploaded. Soon, people started harassing them online, warning the girl to not meet the boyfriend. The boy said, “She blocked some of them but the rest continued. She is now off social media. Someone meticulously searched and made the list of so many couples. There has to be a team behind this.”

Another name on the list also mentioned the contact of her father. While speaking to The Indian Express, he stated,”I have no clue. My daughter works at a reputed IT company. Let her come home. I will talk about it. If needed we will go to the police”

A girl, who is a student of class XII, was also named on the list. Reportedly, she has broken up with the boy with whom her name is listed, yet she fears for her safety. She said, “I had a relationship for three years but I have broken up with him. I am with someone else now. Will I be harmed?”

Mohammed Sahid, whose name was mentioned along with his friend’s on the list, was shocked upon hearing about it. “Can’t a Muslim boy and a Hindu girl be friends? No one has the right to write about me and my friend like this. This country has so many religions and culture. We may approach the police. We trust the law of the land,” he said.

The list, which is earlier known to have surfaced online in November 2017, was also shared on a group called Milan Mela by an alleged Vishwa Hindu Parishad (VHP) member Biplab Chattopadhyay. Chattopadhyay, who asserts that he had no hand in compiling the list, said, “I did it to draw attention to the fact that Hindu women are being lured and later their religion is being changed.”