In yet another move aimed to end the social exclusion of transgenders, Kerala government has announced reservation for students belonging to the marginalised community who want to pursue degrees in the Arts and Sciences.

The state education department has directed state and affiliated universities to reserve two seats for transgender students in undergraduate and post graduate courses subject to fulfillment of qualification.

The deptt issued a press release stating “Social Justice Department has recommended and forwarded the request for issuing special order for reserving seats for Transgender Students for various courses in Universities and affiliated Arts and Science Colleges,” the government order said.

“Due to societal issues”, according to the order, “these students often have to discontinue their studies or to join other academic institutions after an academic year or after the admission process is closed.”

The government’s move was welcomed by LGBTQ organistation Queerala

Speaking to Hindustan Times, transgender activist Raga Ranjini said, “this will empower transgender students to conquer many heights. Often they are forced to discontinue their studies midway. It will also help them be open about their identity and rub shoulders with everyone.” 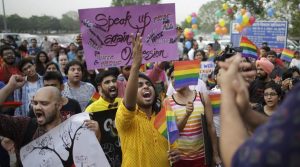 The programme offers a scholarship of Rs 1,250 and shelter homes in each district, where students can also attend classes.