BJP leader Subramanian Swamy who has been pretty vocal about his opinion on the ongoing crisis in the state of Tamil Nadu, on February 21 unleashed a scathing attack on Bollywood actor Kamal Haasan. It all started when someone started a poll on Twitter asking people whether BJP would allow Kamal Haasan to lead Tamil Nadu and run the government as he wished to.

Subramanian Swamy immediately responded saying that he will oppose the “boneless wonder and pompous idiot called Kamal Haasan”. Kamal Haasan who did not hold back and went on to say that he will not respond to the rudeness and that he was more experienced in the “acidic” exchanges than he was. 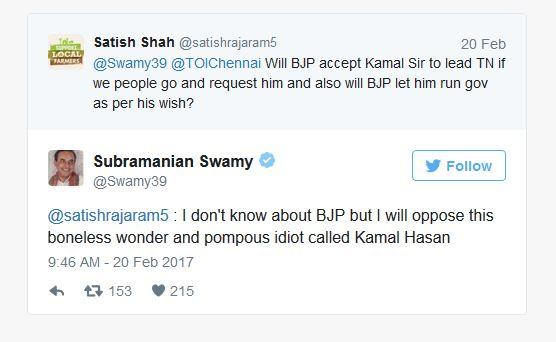 Here’s what Kamal Haasan had to say:

I have1 bone of contention..Its good https://t.co/hkjuatVLrZ called Tamils porikis.Glad I wont have 2 oppose him People will.

Wont retort with rudeness.His experience exceeds mine in acidic political exchanges. He might like his meal boneless.I don’t.Bon apitit sir

Meanwhile, DMK on February 20 filed a petition in Madras High Court challenging the trust vote won by Tamil Nadu Chief Minister E Palaniswami. The opposition party has alleged that appropriate rules were no followed during the floor test. Meanwhile, O Panneerselvam who had said that he doubts the validity of the trust vote is also likely to move court against the confidence vote. Tamil Nadu governor Vidyasagar Rao had the support of 122 MLAs who had voted for him and hence, there was no confusion regarding the same. The opposition party also reportedly wants a fresh voting.

O Panneerselvam, cried foul and refused to back down accusing the MLA’s of betraying late Jayalalithaa and asserted that Amma’s traitors have subverted the democracy. He also claimed that the trust vote is not legitimate nd will meet Governor C Vidyasagar Rao, if needed. CM Palanisamy won the vote of confidence after all 6 divisions of MLAs in Tamil Nadu Assembly vote in his favour.