Last week,  Jharkhand Mukti Morcha (JMM) organised a kissing contest for married couples in Dumaria village of Jharkhand.  However, what was meant to be a harmless public display of affection, has landed two JMM MLAs in trouble.

Reportedly, Bharatiya Janata Party (BJP)  leaders demanded the suspension of the two MLAs from the Jharkhand assembly for having organised the contest. It was an “insult to the culture” of Santhal Pargana division, they claimed.

Soliciting an apology from the two MLAs, Murmu called the contest an “insult to culture” and claimed that in the community, boys and girls don’t even shake hands.

The competition, according to the organisers, was aimed at decreasing the rate of divorces in the tribe, which had witnessed a spike in the recent past. “This event was intended to make love blossom between the couples. In fact, the name of the fair in Santhali language literally means “kiss of love (prem ka chumban),” Marandi said, as per an Indian Express report. He also questioned BJP of being unaware of the realities of the Santhali traditions.

ALSO READ:  Suspected to be witch, Woman lynched for ‘braid-chopping’ in Jharkhand 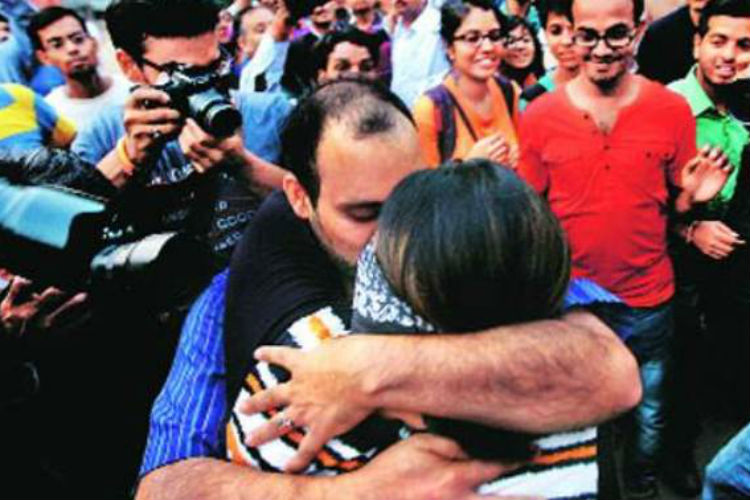 As the issue became the latest bone of contention between political parties, InUth spoke to Prathama Banerjee, a historian from the Centre for the study of Developing Societies, a research institute in New Delhi. Banerjee, who has extensively worked on tribal communities in India, called the entire furore misplaced.

“If such events were organised by Santhals themselves, then I don’t see this as a problem,” she said.

She also dismissed the allegations of such events being a threat. “I don’t think it is a threat to the Santhali culture. They have already been misrepresented in cinema and popular media. This event won’t add any more harm,” she said.

She added that political parties should rather concentrate on important things if they care about the tribals. “There are other important things which are under threat like the Santhal music. It would be better if these can be discussed,” she said.

But she was equally apprehensive about JMM’s idea to ‘promote modernity’ which she termed as ‘strange’. “Santhals are under the threat of politicisation by both BJP and the JMM. I am not surprised by what they do,” she said.