Tamil Nadu Chief Minister J Jayalalitha passed away at the age of 68 on Monday.

Announcing the death of the Jayalalithaa Apollo hospital said that she died due to cardiac arrest and breath her last at 11:30pm. 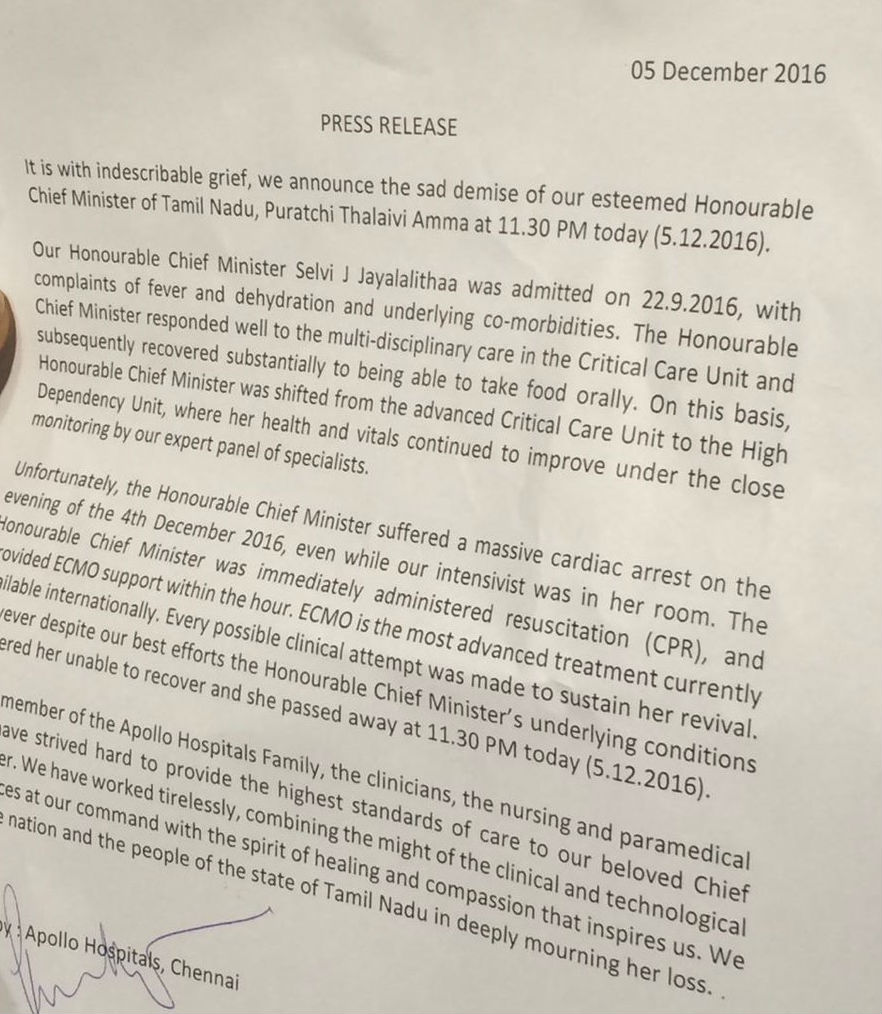 The government has declared 3 days holiday in schools and colleges in the state of Tamil Nadu.

Apollo hospital rubbished the reports of Tamil Nadu Chief Minister J Jayalalithaa passing away earlier this evening saying that she continues to be critical and is still on life support.

Reports of violence outside the hospital emerged soon after the newss of Jayalalithaa’s death broke. Some of the local media reports still say that the Tamil Nadu CM has passed away.

Jayalalithaa’s was in an extremely critical condition she suffered a cardiac arrest late Sunday and had been shifted to the Intensive Care Unit (ICU).

According to local media reports, Jayalalithaa died after suffering a heart attack. Speculations are rife that OP Panneerselvam will be the next Chief Minister of Tamil Nadu. According to reports, MLAs were summoned in the Apollo hospital one by one and made to sign a declaration which said that Panneerselvam who is Jayalalithaa’s loyal understudy will be her successor.

OP Panneerselvam has been in charge of Jayalalithaa’s portfolios since the time the AIADMK chief has been in the hospital and has been the interim CM twice before.

Apollo hospital spokesperson had said that Jayalalitha still is in a extremely grave condition. She was on ECMO and other life support systems. The hospital further had affirmed that she is being closely observed.

Meanwhile, Tamil Nadu is on tender hook after the bus services were stopped and after an incident of stone pelting near Tiruvannamalai-Latha was reported in the state. Traffic police have blocked all the roads leading to Apollo hospital on the Greams Road, in order, to avoid traffic congestion.