Thousands of mourners joined the funeral procession of veteran journalist Shujaat Bukhari, who was assassinated on Thursday evening, by three unknown assailants outside his press colony office in Srinagar.

The funeral took place at his ancestral village Kreeri in Baramulla, where his friends and admirers turned up to mourn the departure of Bukhari, who had championed peace in times of conflict. Two of Bukhari’s security guards were also killed in the attack, The Hindu reported.

The show must go on. As Shujaat would have wanted it to. This is today’s @RisingKashmir issue. That Shujaat’s colleagues were able to bring out the paper in the face of insurmountable grief is a testament to their professionalism & the most fitting tribute to their late boss. pic.twitter.com/ADP70D4F1q

Readers of Rising Kashmir woke up to the news of Bukhari’s death. The front page carried a full page black and white photograph of him against a black background. The daily also carried the message that it would not be cowed by cowards who had killed Bukhari.

“You left all too sudden but you will always be our leading light with your professional conviction and exemplary courage. We won’t be cowed down by the cowards who snatched you from us. We will uphold your principle of telling the truth howsoever unpleasant it may be…Rest in peace!” the paper said.

Bukhari had survived several assassination attempts in the past and was under police protection since 2000. He was also the Kashmir Bureau chief for The Hindu newspaper for nearly 15 years. He had been running the Rising Kashmir for a little over a decade. A voice of reason and sanity, Bukhari had been part of informal peace talks on Kashmir with Pakistani representatives held in Dubai last year. 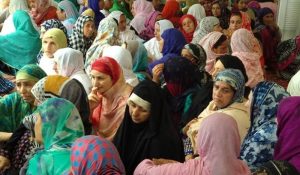 Bukhari’s death came just two days ahead of Eid, when the government had held discussions on whether to prolong ceasefire by security forces on the occassion of Ramzan.

According to police officials, Bukhari’s assassination was meticulously planned. One youth kept surveilling him and gestured to his associates as soon as the senior journalist stepped out of his office and boarded his vehicle to head home, Firstpost.com reported.

In no time, the two others appeared and fired indiscriminately on the vehicle from all sides, leading to the death of the senior journalist and the security guards accompanying him. The attack was pulled off within a few minutes. After spraying the vehicle with bullets, the gunmen fired into the air to prevent people from taking the occupants of the car to the hospital. When three of them were taken to the medical facility, they were declared brought dead.

Terrorism has hit a new low with Shujaat’s killing. That too, on the eve of Eid. We must unite against forces seeking to undermine our attempts to restore peace. Justice will be done. https://t.co/8oCNXan13L

After the incident, the police have put out a public appeal to zero in on the killers with the help of CCTV images.

Meanwhile, Srinagar Police has arrested the person, whose photograph it had released earlier in the day as the fourth suspect who might have been involved in the murder. Police also recovered the pistol stolen by the alleged suspect from one of the guards.