At a time when there is a lot of talk over disquiet in relations between the armed forces and the people of Kashmir, a picture of a CRPF jawan puffing hookah is giving a new dimension to the troubled relations. Though smoking in public places is highly condemnable, this picture is being hailed as a symbol of an improvement in relations between security forces and people.

Since July 8, when militant commander Burhan Muzafar Wani was killed, Kashmir has been on the edge. Siege and strikes have paralysed normal life in the Valley.

As per traditions in Kashmir, hookah is only offered to comrades. Kashmiris are cherishing this photo of “the CRPF personnel having a smile on his face”. “Our hospitality is nothing new. We have always been hospitable even to aggressors,” says a local Showkat Ahmed. 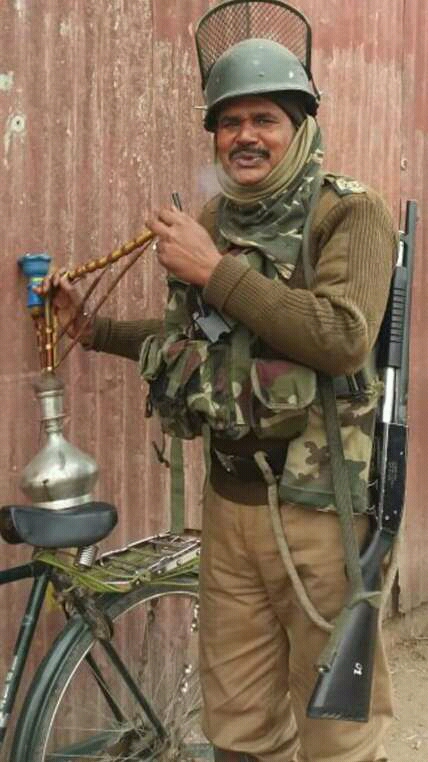 Speaking to InUth, CRPF spokesman Rajesh Yadav, who is also the commandant of 161 battalion, said: “When you are deployed, you obviously don’t carry hukkah along. So it’s quite obvious that hookah belongs to some locals who have offered it to him out of cordial relations, which they must be enjoying. It’s a good gesture and goodwill is welcome because we are serving our own people, not aliens.”

In the same breath, however, the official adds, “But we are not in favor of smoking.”

So will the jawan face punishment? “No, because it’s not that big an issue. But yes we have briefed our boys to refrain from smoking,” the CRPF PRO added.

At least 96 persons have died and over 16,000 have been wounded during street protests in Kashmir since July.