Major Nitin Gogoi, who was at the centre of a major controversy for using a local resident as human shield in Kashmir’s Budgam last year, was briefly detained by police from a hotel in Srinagar with a local girl.

A serving officer, Gogoi had booked a room online for two guests in the morning. At about 10.30 am, the officer arrived at the hotel reception for checking in along with a female guest, The Tribune reported quoting hotel staffers.

The officer reportedly had an argument with the staffers after they sought the identification of the young woman. Due to the commotion that followed people from adjoining commercial complex also arrived.

However, the police statement says that “a one woman (name withheld) and a person, namely Sameer Ahmed of Budgam had come to see some person. But the hotel reception did not allow them to meet the person”.

“Meanwhile, the police party reached the spot and got all the persons to the police station. Later, it was learnt the woman had come to meet an army officer. The identity and particulars of the army officer has been collected by the police.” it added. 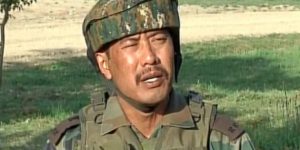 Last year, Gogoi tied a civilian Farooq Ahmad Dar of Chill-Brass village in Budgam to the bonnet of his jeep on the day of Srinagar Parliamentary elections.

Speaking to The Quint, Senior Superintendent of Police, Srinagar, Imtiyaz Ismail Parray said, the police rushed to the spot after it received the call and the statements of all three were recorded.

“The woman stated that she was a friend of Sameer’s and that he was going to meet Gogoi along with her,” he added.

The army official was later handed over to (his) unit after recording their statements.

Some reports suggest that the officer walked in with a minor girl.

Inspector General of Police S.P.Pani has ordered a probe into the incident to be conducted by a Special Investigation Team (SIT) headed by the Superintendent of Police (North) Srinagar.