It was September 4. Xuhaib Maqbool, a 27-year-old news photographer was capturing pictures of street protests in his native Rainawari locality of Srinagar. Suddenly a policeman, chasing mobs, trained his pellet gun at him. Though the lensman pleaded that he is from the “Press”, the cop exhausted the entire pellet cartridge on him.

The tall hunk, who weighed 107 kgs, fell in a pool of blood. He was rushed to the hospital where doctors diagnosed that pellets have maimed his chest, face, and eyes.

Till now, Xuhaib has undergone six eye surgeries. But he is yet to regain full vision. “All he can see is a blurred image,” says a medico treating him.

Unable to work anymore, Xuhaib spends his day in a dark room at home. “Doctors have advised me to avoid light as much as possible, so I spend the day in the dark. But my life has turned dark,” says the man, who spells his name unusually, starting with ‘X’ instead of ‘Z’.

The media group for which he worked is no more concerned about him. “I don’t want to blame them because initially, they all would visit me at the hospital. Maybe they are busy now,” he said.

Recently, a ray of hope emerged for Xuhaib when an internationally reputed photojournalist Altaf Qadri came to his rescue. Qadri has started a Facebook page ‘Support Zuhaib Maqbool News Photographer’.

“‘This could’ve been me’ was the immediate thought which came to my mind as soon as I heard about Zuhaib… I have made this FB page hoping to garner some support for Zuhaib after a lot of friends back home have told me that NO ONE from the fraternity has come forward to help him citing pathetic reasons. I request all of you to close your eyes for 10 minutes and think if this darkness was your destiny forever. It could’ve actually been You or Me. I apologize for tagging you without your permission,” Qadri posted. 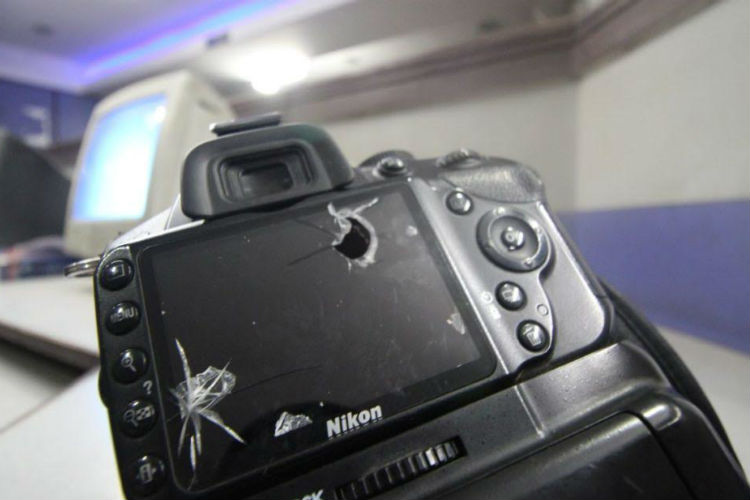 The broken camera of Xuhaib Maqbool

Many fellow journalists are now looking forward to “do something” for him. But media persons largely have been helpless during such situations in this trouble-torn Valley.

Recently, Fayaz Kaloo, one of the most influential journalists in the region and editor-in-chief of daily Greater Kashmir was elected as President of the Kashmir Editors Guild. While his election has been big news in local media, taking initiatives for rehabilitation of journalists like Xuhaib will be among one of the challenges for Kaloo’s team at KEG.

As for Xuhaib, who loves bodybuilding, has lost over 30 kgs on the bed. “Because of pellets in my body, I can’t even exercise. All I do is count days. Today is my 108th day.”

The last thing he vividly remembers to have seen is the man in Khaki. “His face was covered and he wore a cargo T-shirt. The moment he trained the gun at me, I said ‘Press’ but he presumably took it as a signal to press the trigger.”