On March 28, when three civilians were killed during protests near an encounter site in central Kashmir’s Budgam district, an equally big number of local youth was busy with sporting activities, particularly the final match of a volley tournament. So, while on one hand, it was anti-India protests spreading like wildfire in the valley; on the other hand, Khelo India sporting activities were underway with all zeal and vigor in the restive region.

Within two months of its launch in February 2017, Khelo India fever has gripped Kashmir with almost every youngster trying to reap benefits of the centrally-sponsored scheme. Officials say around 70,000 youth have already been enrolled in the program, while the number of aspirants is growing with each passing day.

Under the scheme for which the central government has already sanctioned Rs 2 crore for the region, various National-level competitions are being held for Under-14 and Under-17 categories.

The Kashmir youth’s response to this initiative has been phenomenal. Take the case of volatile areas. Otherwise seen as a hotbed of militancy and aazadi sentiment, Anantnag district is racing fast on the Khelo India track.  Divisional Sports Officer Nusrat Ara says each of the eight blocks of the district has a representation of over 800 candidates. Ara said, “I’ve never seen a public response so huge, as it happens to be for Khelo India.” “Its popularity is rising with each passing day whereas presently various village level tournaments are underway,” she added. 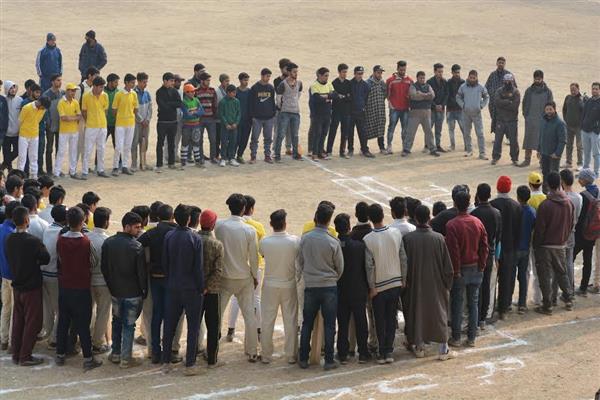 A major attraction towards this centrally-funded scheme is the monetary benefits attached to it. Officials said that the participants are given a minimum cash amount of Rs 75 for refreshment and Rs 40 for transportation per day, whereas for district-level tournaments, first prize for each player of the winning team is Rs 1500.

Many youngsters look at Khelo India as an opportunity to make easy money. “Hartal or normalcy, I don’t want to miss even a day of Khelo India because apart from keeping me fit it fetches me pocket money, what more do I need?” said Yohan Sheikh, a class 11 student from Budgam, who loves playing football.

Given the massive response, the state government looks ahead to seek more funding from New Delhi to take the sporting activities to every home. Haji Abdul Qayoom, J&K’s Chief Sports Officer said, “Given the government funding and public interest, the day is not that far off when we’ll have one youngster from every Kashmiri family playing under Khelo India.”

Interestingly, in the wake of the unrest of 2016, the state government had invested heavily in the revival of sporting activities, something which helped the government restore normalcy to an extent. Khelo India has come as a shot in the arm. So, be it Khelo India or some other similar event, sporting activities are proving a litmus test for protest programs given by separatists.

Interestingly on March 29, when Hurriyat called for daylong hartal against killing of three youth in Chadoora area of Budgam, this district remained equally busy to host the final match of the volleyball tournament sponsored by J&K Police. As per an official handout released by J&K Police, a volleyball tournament titled Athwaas (which translates to handshake in English) was hosted at the Armed Police Complex, Humhama.

Experts on Kashmir have been advocating promotion of sporting activities to counter indoctrination of Kashmiri youth.  Former Army commander Lt. General Syed Ata Hasnain is one such prominent voice. Speaking at the recently held 19th Asian Security Conference on the topic  Combating Terrorism: Evolving an Asian Response, Gen. Hasnain reiterated the need to attract the Kashmiri youth towards activities like sports, music, and arts.