In restive Jammu and Kashmir, 2017 has commenced with a controversy over calendars. While the state government released the J&K Bank calendar titled Pride of Paradise featuring 12 young achievers, the separatists countered the move with their own version of the same theme, highlighting a variety including victims of unrest and slain militants.

If the J&K Bank calendar’s first month highlights Tajamul Islam, the 8-year-old world kickboxing champion, the separatists have dedicated their January page to Insha Mushtaq, the 14-year-old schoolgirl blinded by pellets in the unrest of 2016.

Amid this cold war between government and separatists, trollers have come up with their own versions of memes to counter the original calendars. One of the meme-calendar, resembling the design of the Pride of Paradise, has replaced the faces of original achievers with fake ones. From politician Sajad Gani Lone to former “encounter specialist” Syed Ashiq Bukhari, many feature on these fake calendars, being widely circulated on the social media.
With no end to dissent, some forces torched the copies of original calendars and subsequently circulated the protest pictures on social media.

But many like Tabish Habib, a young entrepreneur are outraged. “I am no fan of this calendar but isn’t it a shame for all Kashmiris to every time discard and discredit their own kin! When I think about this theme, I think it’s the thought that counts which in my perception was to appreciate able youngsters which were in any way better than any seasonal fruit of last year. But what a shame it is that we associate everyone and everything to the conflict which every time leads us nowhere!,” she posted on Facebook alongside a picture of the burnt calendar. 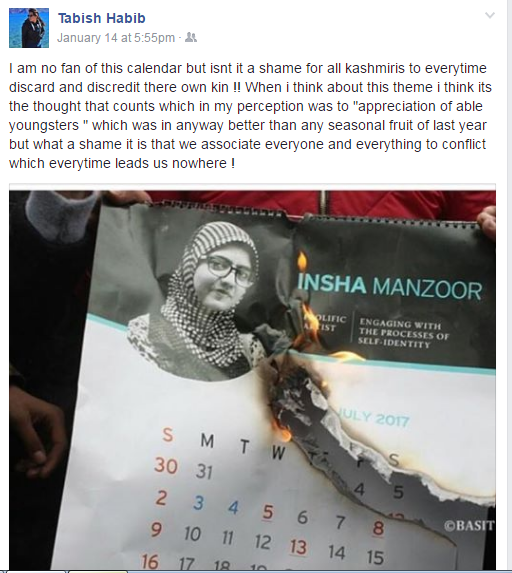 People look so fed up of the controversy that no one is interested in getting a copy of the calendars. As of now, the response is so poor that J&K Bank has started special drive whereby people are requested to take a copy of calendar from markets and roads.

Amid this din, Minister for Consumer Affairs Chowdhary Zulfikar Ali has released a special government calendar. Here Zulfikar features on every page in different moods and poses.

The minister looks so obsessed with his pictures, that he has ensured an additional picture of his even inside the date section. The government even held a special function to unveil this calendar.

If the state government releases its own calendar, why did Zulfikar put an extra burden on state exchequer? Or has he opted for self-promotion?

Whatever may be the reason, calendars were never so controversial in Kashmir before.