Dangal girl Zaira Wasim posted an apology on Facebook today in the afternoon which took the internet by storm and gave the national media a new chance to play the guess game. While many speculated that she apologised because she was threatened, a few others assumed that it was a reaction as she was trolled heavily by the social media users. However, Zaira denied any reports of being threatened and posted a new post clarifying the apology.

“Regarding my last post, I have no idea why this has become such a big issue. I just wanted to make sure that I did not hurt anyone’s feelings and all of a sudden it has been turned into national news,” Zaira said in a statement issued on her Facebook account.

“Again and again I am telling people that I have not been forced into anything by anyone. This was post was not meant against anyone, just wanted to make sure that people were not hurt by what I was doing. From media to everyone else, please don’t blow this out of proportion. Neither was I forced nor am I against anyone. Hopefully this post just stops this once and for all.”

However, according to the sources, what led to Zaira’s apology her picture with the chief minister which was was clubbed with that of Insha Mushtaq, a girl blinded by the pellets during the 7-month long unrest in the valley which started on 9 July, 2016, after Burhan Wani was killed by the Army. The morphed picture has gone viral on social media since Zaira met Mehbooba Mufti.

Here’s the picture which pained Zaira and compelled her to ask people not to consider her as their role model and to not follow her footsteps. 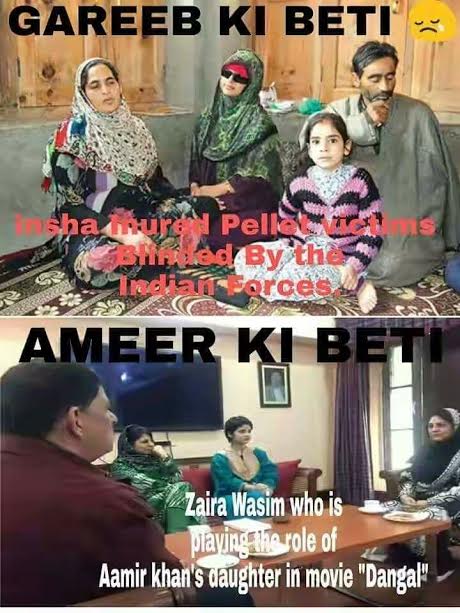