After over 70 years of separation, the members of a divided family living on the two side of LoC in Kashmir have resolved to do something together not only to “revive the broken lineage” but also to restore some ancestral legacy.

In the memory of their great-grandfather, Syed Mir Abid Gilani, son of Syed Shah Muhammad Ghous Lahori, a revered 16th century saint, his progeny living on the two sides of the deadly fence have unanimously constituted a forum—the Anjuman-e-Saadat Gilani Aar Paar Jammu and Kashmir—to restore the glory of his otherwise vandalised mausoleum in Srinagar. Officials say it’s believed to be for the first time that families living along the two sides of the LoC will undertake such an initiative together.

When Syed Zamir Ahmed and Syed Mukhtar Ahmed of Muzaffarabad in PoK boarded the Caravan-e-Aman bus for travel to Kashmir, the duo didn’t think in their wildest imaginations that the visit would evolve an emotional bond much beyond any typical family reunion.

In Kashmir, they were received by their relative and host Syed Shabbir Gilani, a retired official. During their brief trip, members of the twin families decided to pay obeisance at the mausoleum of their revered ancestor, Syed Mir Abid Gilani in Khanyar locality of Srinagar.

But to their utter shock, there were little remains of the mausoleum left as even the tombstone looked displaced. The family says over the years amid unabated encroachments, a full-fledged graveyard has come up but at the cost of the mausoleum.

But then, Syed Mir Abid Gilani was no ordinary figure. Historians say he ranked among the most respected personalities. His aura of influence was such that even the then Mughal Emperors held high esteems for him and had gifted him 15 villages on the banks of Nigeen lake as Nazrana to run free langar for his disciples, the historians said. 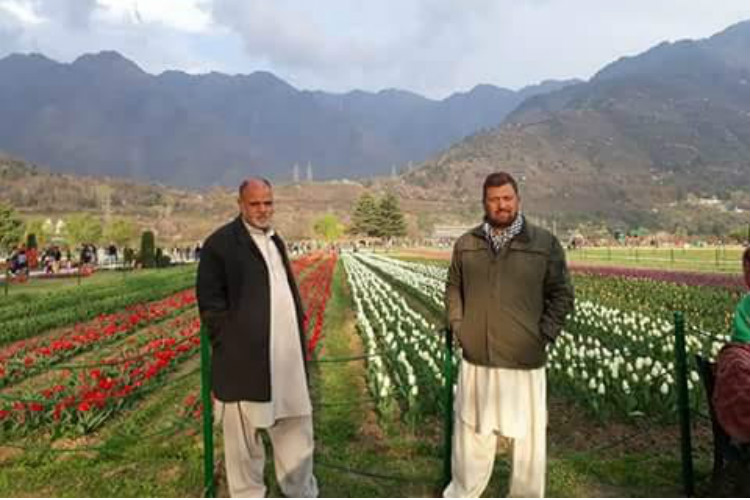 And respect for this noble soul didn’t end even after his death. He was buried next to Masjid Dara Shikoh, a mosque named after the Mughal prince.

As per a book on Kashmir history by Mufti Azam Muhammad Rashid Ud Din, Gilani’s mausoleum was so big that it was spread over four kanals (over an area of 10,000 square feet).

However, in the post-1947 era, the mausoleum witnessed encroachments and other vandalization. “In the last few years of turmoil, the neglect reached a level that even the tombstone was displaced from his grave,” the descendants of Gilani told InUth.

But now, a hope has emerged. The visiting Gilanis from Muzaffarabad has joined hands with their counterparts in Kashmir to restore the glory of their ancestral mausoleum. The forum comprises of over two dozen members. As part of this first-of-its-kind endeavour, the families on two sides will pool resources to reconstruct a mausoleum.

While the elders of the Gilani dynasty recently sat together to formulate the forum comprising of around two dozen basic members from the two sides of the LoC, the youngsters are showing equal concern to lend a helping hand. One of them, Syed Saddam Gilani, a young MBA student from Kashmir University, looks ahead for the conservation of their ancestral mausoleum in accordance with the cultural heritage of Kashmir. “I have requested my dad to rope in services of heritage experts.”