In a move to make its streets free of beggars, Hyderabad had come up with an ambitious ‘rehabilitation drive’ last month just ahead of Ivanka Trump’s visit. Hundreds of beggars were apprehended and were sent to rehabilitation centres.

But they are now back on streets and have started seeking alms in public, an ‘offence’ for which they were hauled up.

The rehabilitation drive being carried out by police last month:

Last month, Hyderabad police had issued a notification prohibiting begging in the city. The ban order was said to be in force from 8th November till 7th January 2018.  But as per a report by the Hindustan Times, many beggars who left the rehabilitation homes are now back in business.

The beggars were taken to Anand Ashram shelters inside Chanchalguda and Cherlapalli jail premises inside the state’s prison department. The initiative was a joint effort by the Greater Hyderabad Municipal Corporation and Telangana Police.

Many had then criticised the move saying that it was done only because Ivanka Trump (US President’s daughter and advisor) was visiting the city to attend the Global Entrepreneurship Summit on November 28-29.

However, Telangana Prison Department rubbished all the allegations around the initiative. “All these are half truths. Earlier, media said that it was done because of Ivanka’s visit and now they say beggars are back. The reports are incorrect,” Vinay Kumar Singh, Director General said.

“The rehabilitation drive was stopped for 15 days between November 15 to 30. The beggars you now see on the streets today are probably the ones who weren’t picked up that time or those who came to the city later,” he added.

He maintained that rehabilitation is a continuous process and the department has initiated the admission process of beggars. “All police stations have been informed. We are now expecting more admissions,” he said. 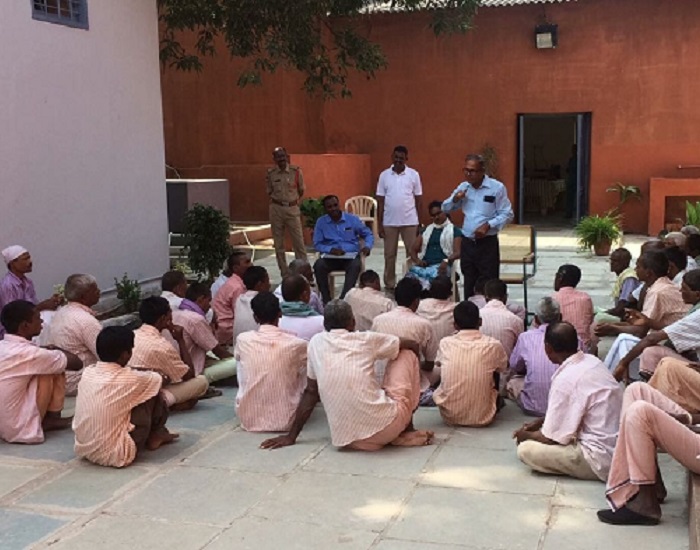 The inmates being given counselling at the centre | Source: TK Sreeraj

The beggars are provided with food and an adequate facility to stay. During their course of stay, they are given counseling to convince them to quit begging. Once they are rehabilitated, the prison department contacts their respective family members. After taking an assurance from them, the beggars are released.

But Singh said that those who have restarted begging even after being rehabilitated will have to face arrest. “We have the details of all those who came to our shelter homes. They will be arrested if they don’t mend their ways. We have set a deadline of November 20 to make this city free of beggars,” he said.