In a first of its kind initiative, a collective of civil society members has started a database of the religious hate violence that has taken place in the country over the last four years.

Documentation of the Oppressed has documented 489 cases of communal attacks wherein a person or a group of people have been attacked/killed or threatened on the basis of his/her religious identity.

ALSO READ: Amid communal riots in Basirhat, Muslims are pooling money for Hindu neighbours to rebuild their homes

As per the database, 2670 persons have been victims of different communal violence attacks that took place across the country since 2014 — the year Bharatiya Janata Party rose to power at the Centre, with Narendra Modi as the prime minister.

The database was launched in New Delhi on March 7 in presence of senior lawyers and prominent civil and human rights activists.

Screenshot of the database

“The objective of the database is to encourage community based reporting and intervention through a common documentation platform for civil society of marginalised groups: DOTO database. A platform that addresses both immediate and long-term issues related to the systemic violation of fundamental rights, erosion of constitutional values and the organization and deployment of ‘hate'”, the group said in a statement.

The online repository has divided these incidents into various categories like the nature of the violence, state where the crime took place, the government in power and the religion of the victim. It also documents the known political affiliation of the perpetrators of these crimes. All the incidents on the database have a case summary curated from news sources and basic information like the concerned police station, the name of the perpetrators and causal factors.

Out of total 2670 victims, 1347 are Muslims, followed by 917 Christain victims. 64 of the victims of communal attacks are Hindus. However, the database doesn’t provide the breakdown of caste-based violence.

In terms of geography, Uttar Pradesh tops the list of religious hate violence with 85 incidents, followed by Karnataka, Bihar and Madhya Pradesh. The National Capital Territory of Delhi witnessed 32 such incidents since 2014.

The nature of violence, according to the database, was mostly physical assault. While 57 incidents involved communal tension or riots, there were 54 cases of lynching and murder.

Vipul Kumar, one of the members who curated the DOTO database, told InUth,

“Documentation and collection of facts can be used by different stakeholders who want to keep themselves informed about what’s happening and what’s the intensity of these incidents. It can also help in legal, political and international advocacy.” 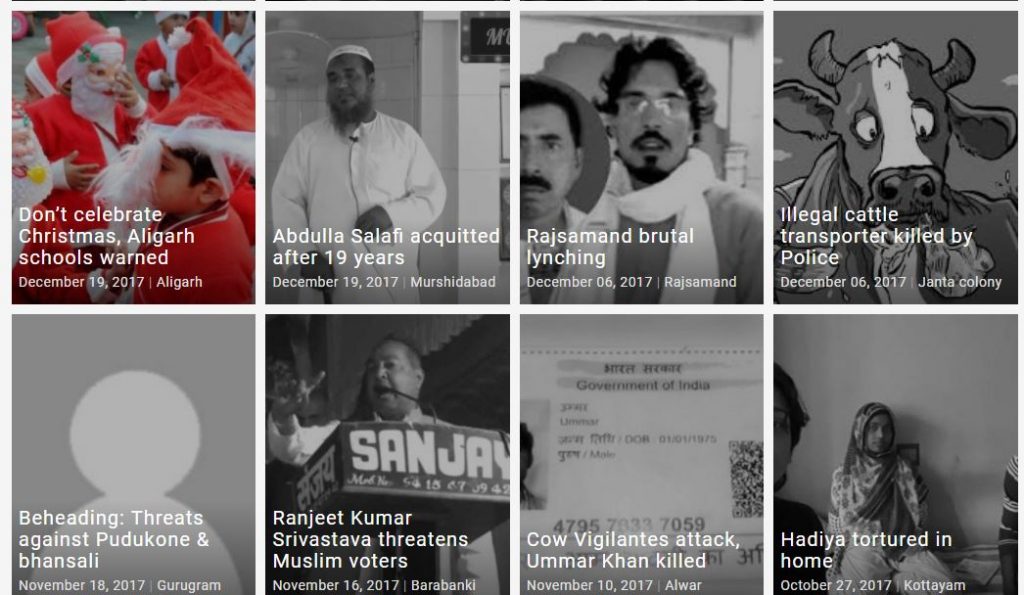 ALSO READ: Why You Need To Know About The Farmer’s March in Mumbai

According to Kumar, the database will ensure “accountability” of police and law enforcement agencies.

“Most of the violence is organized and occurs because offenders have confidence that they will get away and no one will ask questions. Law enforcement also have zero accountability which makes such instances easier. The moment everyone’s watching what’s happening, the offenders also feel their action is being watched. Police would also feel they are being watched. So it should bring some accountability.”

Kumar also added that they were planning to launch a helpline which can directly respond to the instances of violence.