The hackers have gone ahead to use extreme abusive tweets against Rahul Gandhi and the Congress party. The hackers have made it clear in a series of tweets that they do not have any political agenda. The Congress could not manage to take down the questionable posts posted by the hackers for over 45 minutes. However, looks like the account has been restored now and the expletive-laden tweets have been now taken down.

The hackers also informed the public that they managed to hack into the party’s emails and thereafter went on to threaten Congress to “expose” them by making the emails public. The Congress is said to raise the issue of hacking in the parliament during the ongoing winter session. 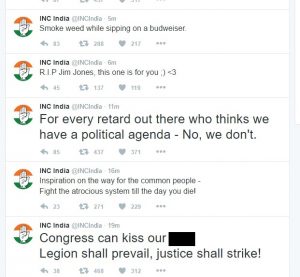 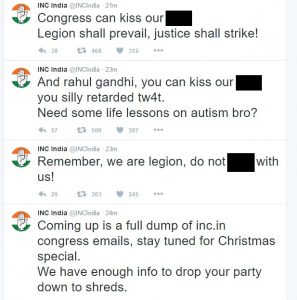 Yesterday, Rahul Gandhi’s official Twitter account was hacked around 8.45 PM and some messages with obscene language were put out, However, the party deleted the posts soon after. The Congress claimed that the Bharatiya Janata Party was after the entire episode.