Several internet service providers and telecom operators in India have blocked Wayback Machine, one of the world’s oldest web history archive site. The development was first reported by Medianama.com, an online news portal. Users who tried to visit the site got an error message: “Your requested URL has been blocked as per directions received from Department of Telecommunications, Government of India”.

The Internet Archive launched the Wayback Machine in 2001, and the service enables users to access web pages across time, which the archive calls a “three-dimensional index”.

The San Francisco-based Internet Archive launched the Wayback Machine in 2001, and the service enables users to access web pages across time, which the archive calls a “three-dimensional index”.

Among the operators that seem to have blocked access to the site include BSNL, MTNL, Airtel, Aircel and Tikona, as per the screenshot shared by Twitter users. There is not much clarity on why these sites have been blocked. 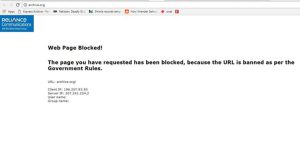 According to reports, the Wayback Machine tried to reach out to both the Department of Telecom (DoT) and MeITY but has not received any response.”

“Obviously, we are disappointed and concerned by this situation and are very eager to understand why it’s happening and see full access restored to archive.org.” An Internet Archive spokesperson told Medianama.

The facility allowed web users to go back to a particular date and then check out a specific website or web page the way it looked on that date.

The Russian government blocked the Wayback Machine in 2015 in an attempt to reportedly curtail access to a single saved webpage that targetted the government.